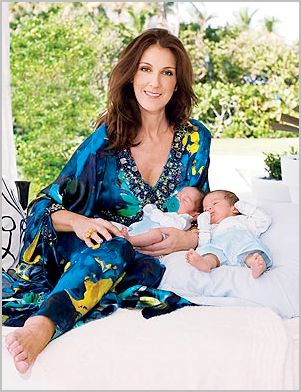 As fans anxiously await Celine Dion’s March 15 opening show and return to Caesars Palace in Las Vegas, the songstress had other matters of importance to fulfill.  Two matters that is.  Celine and husband, Réne Angélil, had 4-month-old twins Eddy and Nelson baptized on Saturday with 200 friends and family members in attendance. Must have been some ceremony!!

It’s been reported by People.com that five godparents (Yes, five! Two and a half for each child?) stood up for the twins, who wore gowns by Baby Dior.  The ceremony took place at St. Elizabeth Ann Seton Catholic Church, followed by a reception at Caesars afterwards.

Dion’s rep told People, “It was a beautiful, traditional family ceremony” of the Melkite Greek Catholic rite, which featured chanted prayers and songs and honored the heritage of Angelil. Hmm…I wonder if she sang as well….

Kate Hudson – Pregnant In A Bikini On Vacation

Jennifer Aniston Has Been Having A Baby For Years Now!