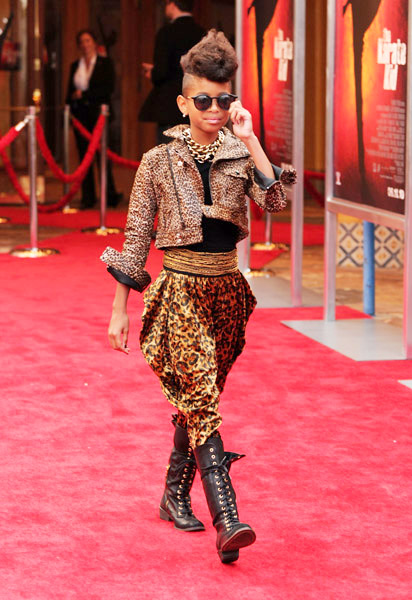 She told Teen Vogue magazine: “I mostly shop at Target and the CBS store, I love notebooks, if you went into my room you would see a pile of notebooks. I can’t live without my phone, my shoes and 20 dollars.” Willow Smith has described her style as “schoolgirl meets punk rock”.

The ‘Whip My Hair’ celebrity has already become a fashion icon despite being only 10 years old – and although she works with a team of stylists and hairdressers, Willow says what she wears often depends on her mood.

She said: “I wear anything I feel like. If I want to put on a pair of Converse with a pencil stuck through them, I will. When I was little my style wasn’t great now it’s schoolgirl meets punk rock.”  Although Willow, the daughter of Hollywood actor Will Smith and his wife Jada Pinkett Smith, has admitted she loves Dolce & Gabbana saying “their designs are really cool”, her own shopping tastes are also a little more down to earth.

Willow had some advice for her fans – saying: “Don’t let anybody tell you you can’t do something because they’re the ones who can’t do it, be true to yourself.”

Now that she has mastered fashion maybe its time for her to publish her philosophy?