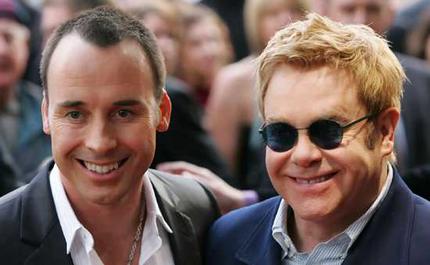 Sir Elton John and his partner David Furnish appeared on Daybreak this morning and spoke about their baby son Zachary.  Elton admitted that he had become ‘a gibbering wreck’ in front of his five-week-old boy.  And he added that he was the ‘most divine little thing in the world’ as he and partner David Furnish spoke to the show about becoming parents.

Talking to presenter Kate Garraway, Sir Elton said: ‘He’s only five weeks old, just over five weeks old, but those five weeks, you can’t imagine how much love has come out of that little boy for us, and us for him, and it’s been incredible.  ‘I’m like a gibbering wreck in front of him. I just sit there, I make up songs and sing to him in gibberish, I’m very good at gibberish now.’

With Furnish by his side, he said Zachary, who was born via a surrogate in California on Christmas Day, was ‘divine’ and added: ‘Now it’s our chance to make sure we do a good job, and that’s the hardest part.’  He added: ‘I just love him, it’s just great. If you don’t get in the trenches, you’re never going to know about your son, or your daughter.’

Furnish said: ‘I marvel at Elton at 63 years of age, attacking fatherhood for the first time. He’s just a complete natural, he’s rolled his sleeves up and got right involved, it’s been wonderful.’

Sir Elton’s words were certainly nicer than the ones he dished out to celebrities such as The Saturdays, Cheryl Cole and Kim Kardashian.  Speaking to The Word magazine, he said: ‘Frankly, they all sound the same.  It’s hard to tell Girls Aloud from The Saturdays. And then there’s Cheryl Cole… it’s all crap.’

And he also laid into reality TV star Kim Kardashian, calling her ‘some stupid old tart from somewhere’.   Is Elton jealous?