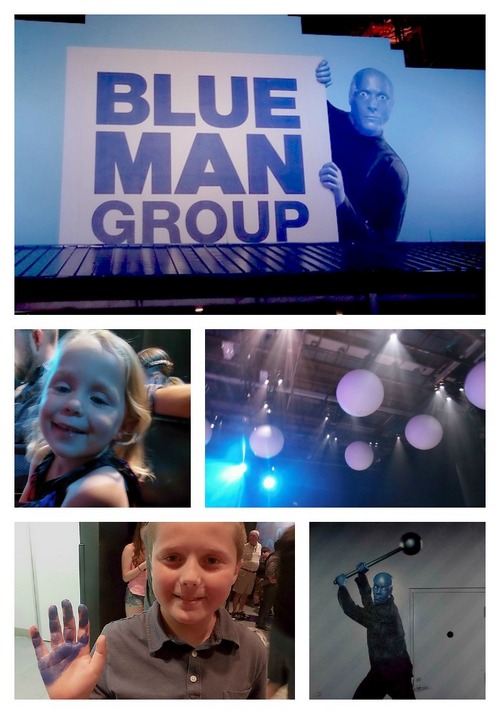 My 10 year-old son had been pointing to giant posters dotted throughout Universal Orlando musing, “That show looks like fun!” All it takes is a giant Blue Man wearing some exotic frock circa Carmen Miranda, and he is sold.

I tried to keep our upcoming visit to The Blue Man Group a secret during our trip, but I couldn’t help but grin every time my kids brought up how “cool” it would be to see the show. They had it figured out, but patronized me anyway.

Universal provided me with an adventure I will never forget. Over the week, we had watched a baby dinosaur hatch, met Spider-Man, rode the Hogwarts Express, saw a fire-breathing dragon, ate some amazing food you can’t find anywhere else, played with The Cat in the Hat, and blasted some aliens. Over the trip I learned so much, like where to find over 22 Toddler-Friendly Spots in Universal Orlando Resort Theme Parks and came up with 16 Tips for Traveling to Universal Orlando Resort With Kids that are super-useful.

This experience with The Blue Man Group was the perfect way to wrap up our trip. We went out with a bang thanks to the show that combines humor, color, exploration, music and even a bit of learning into one show that is full of audience participation.

We walked into the auditorium and I immediately noticed the rows closest to the stage were all wearing plastic macs. It had been raining off and on, but every single person in the block of seats was decked out. I knew we were in for something interesting.

After getting my littler ones situated with booster seats to ensure they could see (SO awesome!) we waited for the show to begin. Looking up, I noticed gigantic white balls hanging from the ceiling. My 6 year-old daughter inquired – “Are those for lighting or something?” I had a feeling they weren’t, and went for the staple mommy-response of, “We will have to wait and see.”

On the stage, a screen with a passage plucked from ‘The Social Synapse‘ by Nona Epinephrine and Sarah Tonin (very puny!) was featured.

“If you would like to establish a connection with people from another culture is it always good to offer a few gifts as a gesture of friendship. But, an even better way to forge a lasting bond is my creating something together. Whether it’s a meal, an art project, or just a spontaneous dance party, when you create with others, you build a connection that lasts a lifetime.”

This sums up what you are about to be a part of. The show, (which I hate to call it “a show” because it is more like “an experience”) isn’t a sit quietly in your seat and observe standard. It’s a collision of art, music, fun, dancing, playing, and laughing.

I won’t spoil the entire program, but the most amazing game of Chubby Bunny opened the fun. I lost count after 20 marshmallows. I will leave it at that.

Another part that spoke to me…

The Blue Man Group created a piece of art that was colorful and didn’t involve a paint brush. (You will have to see how they created it for yourself!) The finished work was completed by a smudged blue fingerprint from the artist and the quirky Blue Man turned to the audience, scanning everyone.

A fellow in the audience held up a $20 bill, waving it around and pointing at himself. I felt the guy waving the cash was missing the point of the show. While it is about fun, there is an underlining message that society and community is about being together and making connections. To underline that point, the Blue Man ignored his cash-waving hand and humbly offered the painting to a small child instead. It was a perfect moment.

Overall, I felt like those quirky blue guys spent more time in the audience than the stage, which was fantastic. It kept your attention, brought you into the show, and made it so there wasn’t a “bad” seat in the house. The men climbed over seats, sampled someone’s candy bar, and connected with everyone with a simple inquiring look. Two people were eventually brought onto the stage at various times.

An adorable lady enjoyed a feast of Twinkies with the trio. Another man now owns a life-size painting of himself. Again, no paintbrushes were involved. I bet your imagination is running wild!

The music was fresh, new sounds mixed with drums and guitars. It was loud and often surprising, so prepare little ones for jolts of unexpected jam sessions. The favorite among my 10, 6, and 3 year old were the pipes that produced different tones as they were moved and turned. The drums with neon painting splashing into the audience explained the need for the plastic macs. That…and the Twinkie surprise. 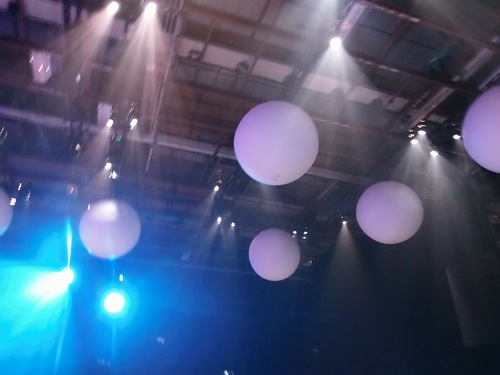 However, the dancing (don’t worry, there is instructional dancing that will have you shaking your hind-quarters…your backside…your bottom…

Right before those giant blow-up balls looming overhead are released for an audience-wide game! Music thumps through the theater as white beach balls at least 5 feet in diameter bounce around the room, passing from each section of the audience. Kids are running through the aisles waiting for the next touch down, people are laughing and you are suddenly part of the show.

After the show, the Blue Men join the audience in the lobby for Blue high-fives and picture opportunities. I appreciated they way they were so incredibly accessible and part of the group. It was amazing from start to finish and I know my kids will be begging for a return visit the next time we are near one of their shows.

Disclosure – Any and all opinions expressed are that of CelebBabyLaundry.com. No compensation was received, however the experience was provided by Universal Orlando.

Get Ready For the Holidays Early By Saving With iMyne