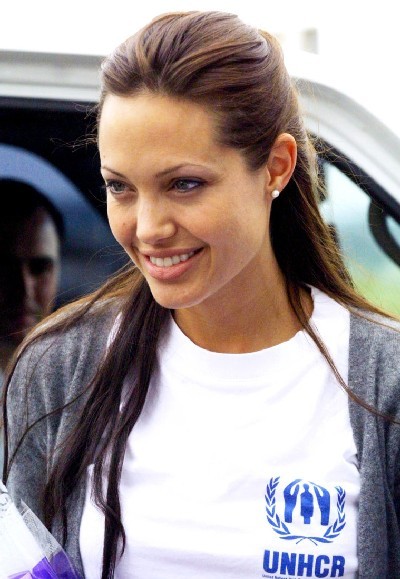 Angelina Jolie is set to adopt a fourth child, a four-year-old orphaned girl from Haiti – this will bring her family to seven children.
Angelina plans to bring the little girl, called Leah, who lost her entire family in the earthquake that devastated Haiti in 2010, to live in her home.

Angelina has already adopted three children, Maddox, nine, Pax, seven, and Zahara, six, and naturally conceived Shiloh, four, and two-year-old twins Knox and Vivienne.  She first met Leah in February 2010, a month after the natural disaster, and the child is expected to go visit her and Brad and their other children before the adoption is authorised in the latter stages of this year.

A source said “Angelina’s lawyers are in the process of getting an authorisation so Leah can spend some time with her in America. That’s standard procedure, basically they need to make sure Leah will adapt well.”   “A lot of observers from groups such as the Red Cross are ensuring that Angelina is treated like anybody else and not fast tracked, which would be viewed insidiously.”

The source added: “There is also a concern about the Haitian authorities not being able to deal with such international pressure. But for now, Angelina is almost reaching the final steps of the gruelling adoption process.  If Leah fits well within her family in the States, she will be able to adopt her.”

Let’s see now – life in one of the poorest and most violent countries in the world – or life with movie star parents in unimaginable luxury, privilege and opportunity?  Hmmm?