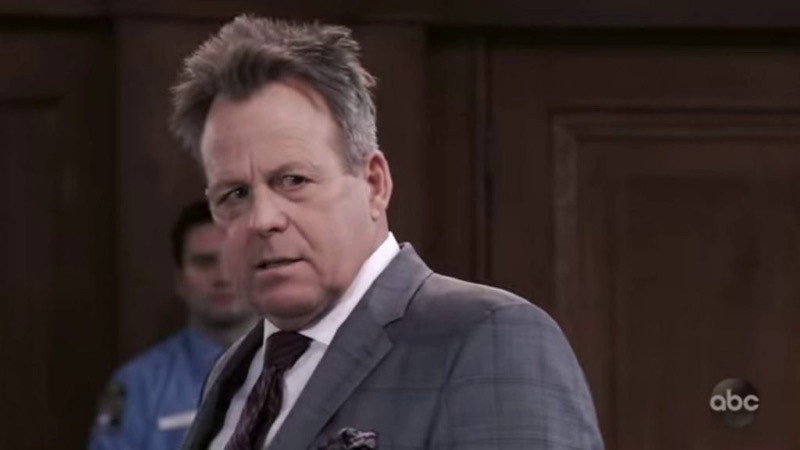 General Hospital (GH) spoilers and updates tease that Scott Baldwin (Kin Shriner) will call an unlikely witness to the stand during Nina Reeves’ (Cynthia Watros) upcoming visitation hearing! It will be someone GH viewers won’t expect at all!

Nina definitely needs a last-minute Hail Mary to counteract all the bad publicity surrounding her legal push to have the right to visitation of her grandson Wiley Corinthos (Viron Weaver)! Nina knows she is within her rights as his flesh and blood grandmother to not only have the right to visit him but to be a part of his life! Michael Corinthos (Chad Duell) granted an exclusive five-part exposé of the ugliest parts of Nina’s past life to smarmy reporter Grant Smoltz (David Lautman).

That exposé even covered when Nina, not out of her coma for even three months put Ava Cassadine (Maura West) into labor and kidnapped Avery Corinthos-Jerome (Ava and Grace Scarola)! She ran away with the newborn to Canada, and Franco Baldwin (Roger Howarth) ran with her and helped bring both to safety.

Scott will definitely fight fire with fire and if the Corinthos crew wants to play ugly, all’s fair in love and war, and this is war if there ever was! He’s saving what he hopes is his Hail Mary witness till last, but first, he brings up some very ugly things from Michael’s past, and Carly Corinthos’ (Laura Wright) as well! He brings up dirt on Carly as a failsafe should Carly eventually countersue for custody of Wiley if he and Nina win this case. Nina isn’t trying for custody yet, but eventually, it may come to that if need be, and Scott wants to be prepared in case it does. Michael has killed a few people and done prison time because he has a very violent temper and that is provable; Carly’s spent a few stints in mental hospitals!

Scott just keeps the hits coming against the Corinthos clan, with every scandal and every sin he can dig up, including Carly the mobstress! Viewers will remember while Sonny Corinthos (Maurice Benard) was in Nixon Falls with amnesia and going by “Mike” that Carly had run his businesses – including his other “business”! Jason Morgan (Steve Burton)had been on the run with Britt Westbourne (Kelly Thiebaud) in Canada and Carly represented the Corinthos crime family at the Five Families meeting!

Scott brings up a teenage Michael killing his stepmother Claudia Zacharra (Sarah Joy Brown) in a violent manner, supposedly defending his mother; who had just given birth to Josslyn Jacks (Eden McCoy). He bashed Claudia’s head in as she held the newborn, ready to run with her – what if he’d missed and killed his baby sister instead? 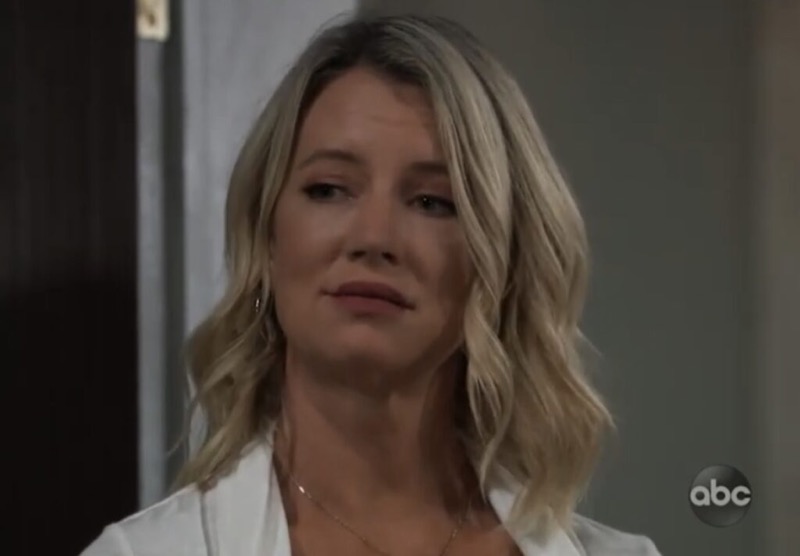 Scott calls someone who is a totally unexpected witness, to Nina’s defense; someone who knows Nina better than nearly anyone else in Port Charles. Previous General Hospital episodes revealed Valentin Cassadine, (James Patrick Stuart) had requested a meeting with Carly previously, trying to convince her to lighten up on her. Valentin had asked Carly to find some compassion in her heart and let up on all the hatred, but it went in one ear and out the other.

Valentin takes the stand, blindsiding Nina and others in the courtroom, and explains how desperately she wanted to find her child only to find out who she was after she died. He makes a case for her right to be in Wiley’s life as the only part of her daughter she’d ever have, and points out Carly withheld her identity!

The Bold And The Beautiful (B&B) Spoilers: ‘Bridge’ Reunite, But Taylor Haunts Ridge