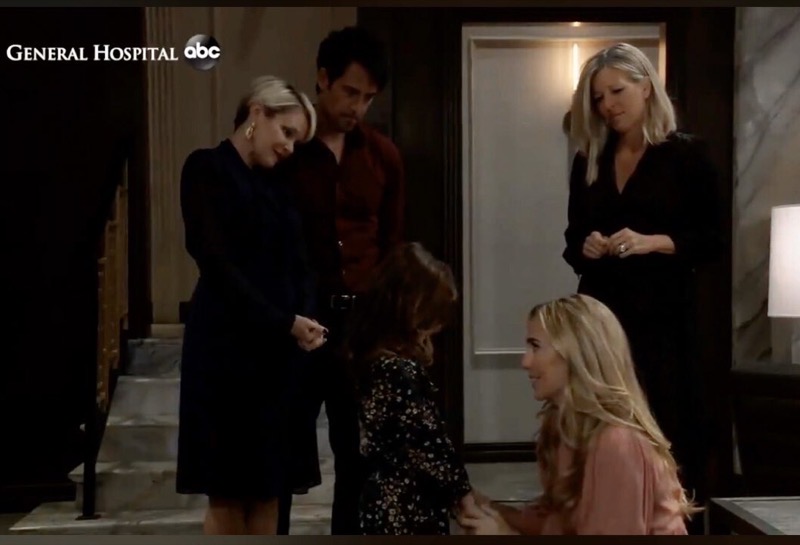 General Hospital spoilers reveal that Port Charles, NY is full of red hot action right now and the Corinthos family is right in the middle of it. Sonny Corinthos (Maurice Benard) has gone missing and his family is now convinced he’s dead. As a result there is a gathering at the mansion where his loved ones reminisce. At the house are several of his kids including Joss Jacks (Eden McCoy) and Avery Corinthos (Grace and Ava Scarola).

The scenes between the sisters was very touching and the young actors really brought it in the emotionally packed scenes.

Eden tweeted, “if only every day could be like this one. #GH #ILoveMyJob @lldubs @MauraWest @Scarolatwins @marcuscoloma #GHFamily,” with a picture that is a still from yesterday’s show in which Joss was reunited with her step-sister Avery Corinthos. Also present are Avery’s mom Ava Jerome (Maura West) and her husband Nicolas Cassadine (Marcus Coloma) and Joss’s mom Carly Corinthos (Laura Wright).

General Hospital spoilers: The Fans Are Loving the Corinthos Family

Eden’s tweet was a huge hit with one fan replying, “@RealEdenMccoy you are so lucky to work with these amazing and wonderful and handsome and very talented people every day I love all of you guys so much but the best thing that happened to me in 2020 was watching.”

Another fan wrote, “you guys are all killing it and i’m truly blessed to have you on my screen every day. it’s really been a bright spot in a rough past year,” and someone else tweeted, “You’re a talented actress Eden! I love when it’s a Joss with her family day.”

General Hospital spoilers: What happens next in Port Charles, NY?

Unfortunately the happiness did not last, at least not for Carly. Ava told her that she would be taking Avery home with her as her custody agreement was with Sonny who was no longer around to arbitrate. In other words, Carly had no claim to the girl and her bio mom was now setting the rules!

Carly looked crushed but what could she do? Actually, the adults got to pointing fingers at one another over past bad behavior, but luckily Joss and Avery were in the kitchen just enjoying each other’s company.

Spoiler alert: Sonny is alive after all, but he has no clue who he is!