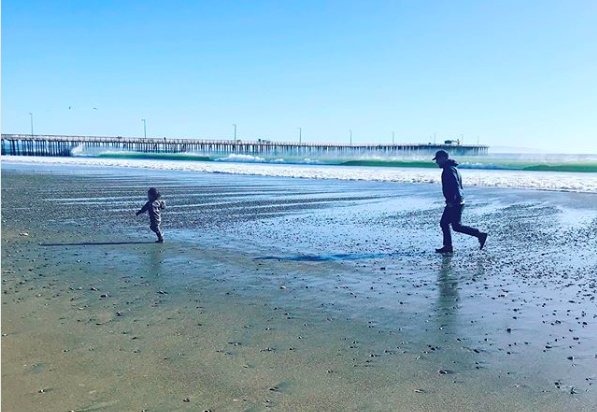 General Hospital spoilers reveal that actor turned director Kimberly McCullough proudly posted a photo of her partner, Jack and little boy, Otis on the beach, and just wrote “My boyz.”

Otis is now two years old and obviously walking and running as shown in the photo on the beach, having been born on June 7, 2017. He is the only child of Kimberly, who started out as a child of seven playing Robin Scorpio on the ABC daytime drama “General Hospital.” Fans of the show watched her literally grow up before their eyes. McCullough has also played the character in one episode of the GH spinoff Port Charles, and in a few episodes of All My Children.

In summer 2007, again as Robin, she played one of the leads in the primetime GH spinoff, General Hospital: Night Shift. She recently retired from acting to go into directing full time. She has been directing part-time since 2011, and McCullough is also an ABC Director Fellow, shadowing other directors. Kimberly recently announced her retirement from acting on her Instagram account, and posted; “This decade I … Picked the right guy, lost a baby, had a baby, found my Jack, moved into my dream home, got my DGA card, worked with talented and kind people, retired from acting, became a Ojai mom , received a hand written note from Kyle MacLachlan and directed 25 episodes of television. It’s been a wild ride and I’m grateful.”

This decade I … Picked the right guy, lost a baby, had a baby, found my Jack, moved into my dream home, got my DGA card, worked with talented and kind people, retired from acting, became a Ojai mom , received a hand written note from Kyle MacLachlan and directed 25 episodes of television. It’s been a wild ride and I’m grateful.

Her television mom, Finola Hughes responded to the post with “YASSSS! GENIUS!” and her television daughter, Brooklyn Rae Silzer who plays Emma Scorpio-Drake also responded, with “Love you” and four hearts following.

She debuted as Robin Scorpio in 1985, walking to her television father, Robert Scorpio, played by Tristan Rogers, in a bouffant dress, hair beribboned, and fluffy socks in adorable “Mary Jane” style shoes. The super-spy never knew that he and his ex-wife Anna Devane, played by Finola Hughes had a child until this iconic scene! She played Robin from 1985 through her last appearance on General Hospital in 2018.

Keep checking Celebrity Baby Laundry for all the latest news, updates and developments!