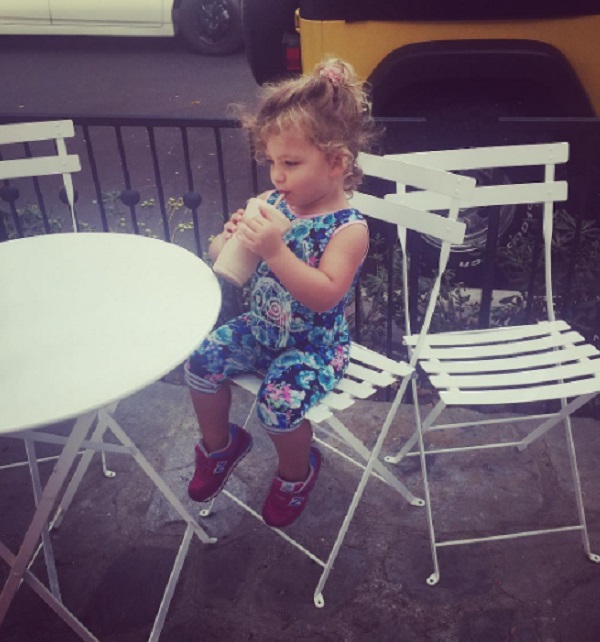 Pretty Little Liars star Tammin Sursok shared some adorable new photos of her and her baby girl, Phoenix Emmanuel Sursok-McEwan on Instagram, and we can’t get enough of this happy toddler!  Tammin posted a photo of Phoenix enjoying a smoothie and revealed that it is her new “after school ritual.”

And, what a healthy after school ritual!  According to Phoenix’s Instagram post, the smoothies that she and her adorable little girl enjoy are made up of, “bananas, dates, almonds milk, almond butter and cocoa.”  They sound absolutely yummy!

Freeform recently announced that Pretty Little Liars is finally coming to an end, and Season 7B will be the final season of the wildly popular teen drama.  Sursok has played the part of Jenna Marshall sine Season 1, Jenna is a pretty complicated character with a serious axe to grind with the liars after a prank they played in high-school left her blind.  Some PLL fans even believe that Jenna Marshall is “Uber A.”

On my blog @bottleandheels I write a really personal story about self acceptance, love and happiness. Here is an excerpt “In our society we focus in the lists and the money and the stuff and the stuff and the stuff – we are drowning in the fucking stuff. We spend more time making more money so we can buy more, yes that’s right, stuff! Somewhere along the road things got turned upside down. Fun fact. It has been proven that the high you get from something new (a possession) is very short lived. We are basing all our happiness on things that ultimately don’t make us happy. The quick fix. Ironic much?? We spend so much time wanting more likes on facebook from people we hardly know to validate our self worth then actually trying to work on how we personally feel about our “actual” self worth. Read the rest. Link in the bio.

Since PLL is wrapping up, Tammin has been hard at work on her fun new blog, Bottles And Heels, and she has been posting a pretty hilarious V-Log series with guest celebrity stars.  It turns out, Tammin is actually pretty funny, and nothing at all like the brooding character Jenna Marshall.

Phoenix Emmanuel was born in October 2013, and she will be turning 3 years old next month!  Tammin’s little one is certainly one of the happiest babies we have laid eyes on, and we adore the photos and videos that she has been posting on social media.