‘The Young and The Restless’ News: “Y&R” Alum Scott Elrod and Girlfriend Gears up for Baby Shower 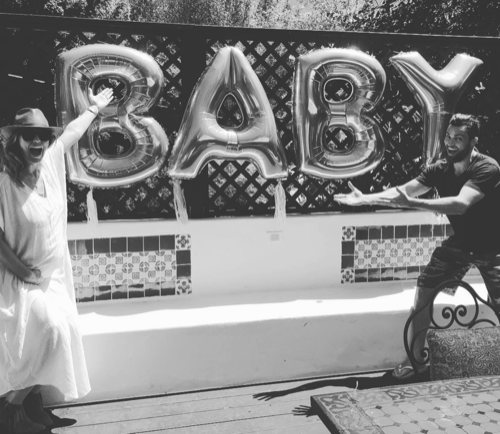 ‘The Young and the Restless’ alum Scott Elrod and his girlfriend Vanessa Vazart glowing in the aftermath of learning they have a child on the way, are gearing up for their upcoming baby shower. It was late last year that it was announced that the happy couple were expecting their first child.

Upon learning the great news, Elrod shared on Instagram, “Sending love to everyone who has influenced me as it has added to whom I have become as my #1 @vanessa_vazart and I have been blessed with a little peanut and now I get the greatest give of all which is to channel that love to him.” It has been several months since the news was released and several of fans waited with anticipation for the announcement of the birth of his first child.

While they still await the announcement, Elrod shared an interesting photo via Instagram yesterday. In this image we see his girlfriend Vazart holding on to her 8 months belly while herself and Elrod point to a sign labeled “Baby”, this image carried the caption “Pre-Baby shower vibes with momma bear…T-minus 2 months till Easton arrives!!!”

We are indeed happy for Elrod and Vazart and can’t wait for the arrival of Easton their first son and child. Elrod is popularly known for his portrayal of Joe Clark on CBS’ number one show “The Young and the Restless”. This role he played from 2014 – 2015. Upon leaving Y&R he joined the cast of ‘Grey’s Anatomy’ as Dr. Major Will Thorpe. Though he lost his role as Joe he gained another role becoming a father for the first time in his entire life.

So fans are you as happy for them as we are? Do you want to see him return to Y&R?