‘Days Of Our Lives’ News: Greg Vaughan & His Sons Have Fun With Hot Wheels 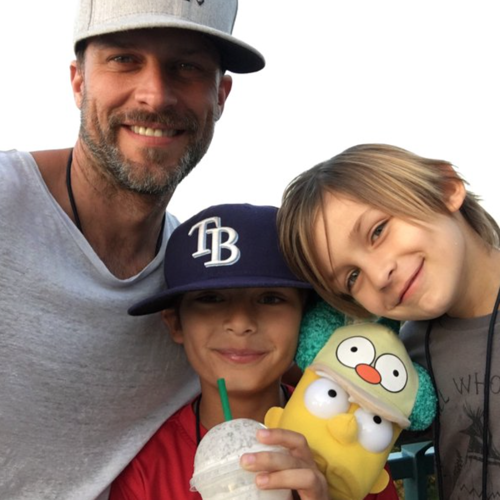 There is nothing like a proud father and nothing like a father having fun with his boys. “Days of Our Lives” Greg Vaughan who is from Texas, is a proud father of three boys. Vaughan shared this morning, his pleasure of his boys via Twitter saying “Big Shout out to @Hot_Wheeld connecting fathers and sons! #hotwheels #jathanvaughan #landanvaughan #cavanvaughan”

Vaughan three sons and himself were apparently having fun. His sons Landan, Jathan and Cavan are seen in photograph smiling and holding onto their fun wheeled toys. Although their daddy has a long history in the daytime world with roles on “General Hospital” as Lucky Spencer and “Days of Our Lives” as Eric Brady, he has to be a father figure to his children.

Vaughan is expected to last air as Eric on “DOOL” in the coming months. Since his time ended at the Sony studios he has booked a role on Oprah’s Queen Sugar with a slated release in the near future. With his extra time Vaughan will be travelling and having fun experiences with his children. We wonder if they’ll follow in their father’s footsteps and become actors later in life. He is also exploring some father and son time, he recently posted a photo of his son Landan having a kick back in the park.

Vaughan is expected to spend more time with his children as he tweeted he will be going back to Universal Studios Hollywood Theme Park, but this time, he’ll make a visit with all of his boys. Surely he will continue to capture those fun moments and share them via social media for us to see. Great way to treat your children Greg, having fun with them is the best thing a father could do these days.