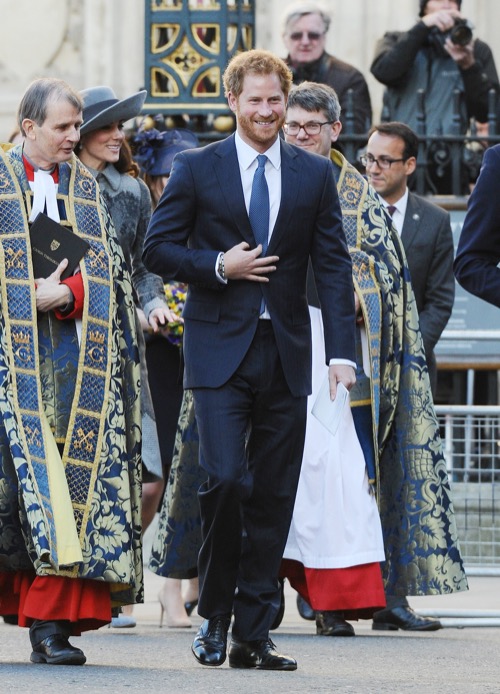 Prince Harry gave an exclusive interview to Good Morning America’s Robin Roberts in which Harry discussed Princess Diana, Prince William and Kate Middleton. Harry revealed he is certain Diana would want him to settle down and have children. Also, that Diana would be incredibly proud of Harry, William’s and Kate for carrying on her legacy.

In the interview Harry also discussed the upcoming Invites Games which will be held in Orlando, Florida May 1 through May 6. Prince Harry reminisced about going to Disney World with Princess Diana and riding Space Mountain about 14 times. “It’s one of my very, very happy memories. There are all sorts of places all over the world where we’re very lucky to have those memories with our mother.”

Talk turned to what Diana would have thought about the family that Prince William, Kate Middleton and Prince Harry have built. “I think she’s looking down with tears in her eyes being incredibly proud of what we’ve established.”

Of course Harry addressed that Diana’s happiness would have been complete if the fifth-in –line to the throne were to settle down and have a family of his own. “I’m sure she’s longing for me to have kids so she could be a grandmother again,” Harry laughed.

Harry couldn’t help but talk about how Diana’s death affected his life. Prince Harry was barely 13-years-old when Diana died in a tragic car accident in Paris on August 31, 1997. “I think that losing your mother at such a young age does end up shaping your life, massively, of course it does,” the prince said, his voice breaking.

Being Uncle Harry to Prince George and Princess Charlotte has been a joy. Prince Harry loves spending time with his young nephew and niece. “You’ve got to have fun in life, otherwise, imagine life without fun. You’ve got to be taken seriously, but I hope I’m the fun uncle.”

Speaking about children, Prince Harry revealed he “Can’t wait for the day” he becomes a father. It will be fantastic.”

Though Prince Harry is in the United States for the Invictus Games which he founded, the interview with Robin Roberts did focus much of the interview on the Royal Family, especially on memories of Princess Diana and what she would think of Prince Harry, Prince William and Kate Middleton, Prince George and Princess Charlotte.

‘Days Of Our Lives’ News: Greg Vaughan & His Sons Have Fun With Hot Wheels