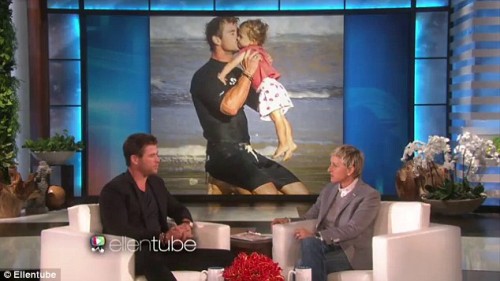 While making a Tuesday appearance on The Ellen DeGeneres Show, Chris Hemsworth opened up about hid family life with wife Elsa Pataky and their children, 3-year-old daughter India and 1-year-old twin sons Tristan and Sasha.

The Avengers: Age Of Ultron actor recounted his recent trip from ‘hell’.

“We actually flew from Australia to London the other day and door-to-door it’s about a 30-hour trip and it was it was kinda like the trip from hell,” Hemsworth told. “They were all sick and literally took it in turns to scream. Like one would kind of do it and look over and say, ‘I’m done you want a turn? Yup.’ (Ahh!) And the whole cabin wanted to kick us off.”

Hemsworth says that Pataky who was born in Spain has already taught their eldest child to speak Spanish.

“My daughter’s bilingual,” Hemsworth shared. “You walk in the room and if someone’s not authentically Spanish then she just won’t even have it.”

“Even if my mom or someone attempts to speak in Spanish, she’s like, ‘That’s horrible, you’re butchering the language, get out.’”

On Monday, the couple walked the red carpet of the L.A. premiere of Avengers: Age Of Ultron. The movie hits theatres April 22nd.

Kelly Clarkson: I Don’t Obsess About My Weight