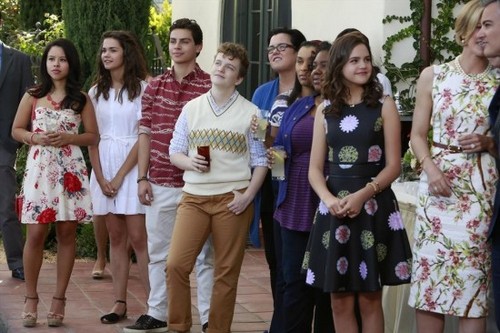 The Fosters ABC Family’s compelling drama returns tonight with its seventh episode of season 2 called, “Someone’s Little Sister.” On the last episode the Foster kids attended a Mexican street festival, but the fun day took a turn when emotions flared up. With help from Wyatt, Callie worked to overcame her recent bout of panic attacks by learning to trust her instincts, but an encounter with someone from the past threatened to violently derail her progress.

Mat surprised Mariana with a date at the festival and was confused when Mariana seemed offended. Jesus tried to impress Hayley but she wanted him to prove he’s with her for more than just sex. Did you watch the last episode? If you missed it we have a full and detailed recap, right here for you.

On tonight’s episode in an effort to help Rita with a dilemma involving Girls United, Callie calls in a favor from her wealthy biological father, Robert Quinn. But an unexpected betrayal threatens to derail the new bond she’s forging with the Quinns. Meanwhile, the pressure Connor faces from his father to end his friendship with Jude intensifies and leads Lena to make a life-changing decision. The tension mounts between Brandon and Lou, despite their bandmate Mat’s warnings against drama. And a visit with someone from his past makes Jesus see his relationship with Hayley in a whole new light.

While you wait for the recap, hit up our comments and tell us how excited you are for the second season of The Fosters and enjoy a sneak peek of tonight’s episode below.