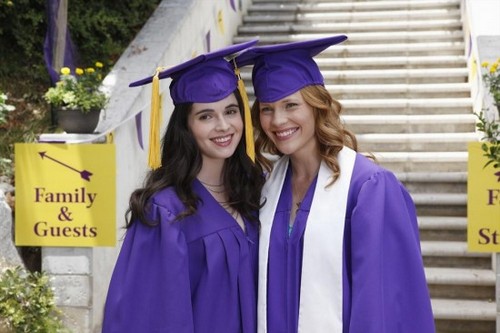 Tonight on the ABC Family their hit show Switched At Birth continues with a new episode and the season 3 finale called, “And Life Begins Right Away.” On the last episode Regina, Kathryn and John were shocked when Bay told them about the extent of Daphne’s self-destructive behavior, prompting the parents to set some ground rules.

Bay reconsidered attending the prom when the school board implemented a new rule regarding dance dress code. Daphne continued her downward spiral when a bad decision put her job at the clinic in jeopardy. Did you watch last week’s episode? If you missed it we have a full and detailed recap, right here for you.

On tonight’s episode, everyone is looking forward to commencement until shocking news about Carlton threatens to overshadow their special day. Daphne fears her future is in jeopardy when her past catches up with her. John and Kathryn are not happy when they learn about Bay’s non-traditional post-graduation plans. Meanwhile, Mary Beth is pleased when Travis’s wish comes true.

Tune in to ABC Family at 8PM EST to watch “And Life Begins Right Away” we’ll also be recapping it all live for you right here. In the meantime head to our comments section and tell us your thoughts on season two so far and enjoy a sneak peek of tonight’s episode below.