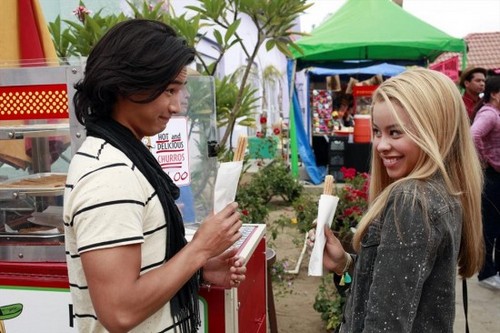 The Fosters ABC Family’s compelling drama returns tonight with its seventh episode of season 2 called, “Leaky Faucets.”  On the last episode Callie payed a visit to Girls United to pitch in for Community Day and was surprised by new developments at her former foster group home. Paranoid neighbors were putting pressure on the home’s landlord to kick the girls out, and a new resident had secrets that could jeopardize the safety of the entire group.

Meanwhile, Mariana and Hayley planned to cook a romantic double-date dinner for Mat and Jesus. And Stef received a concerning letter from Ana. Did you watch the last episode? If you missed it we have a full and detailed recap, right here for you.

On tonight’s episode the Foster kids attend a Mexican street festival, but the fun day takes a turn when emotions flare up. With help from Wyatt, Callie works to overcome her recent bout of panic attacks by learning to trust her instincts, but an encounter with someone from the past threatens to violently derail her progress. Mat surprises Mariana with a date at the festival and is confused when Mariana seems offended. Jesus tries to impress Hayley but she wants him to prove he’s with her for more than just sex.

Pregnant Women Warned Not to Use Antibacterial Soaps