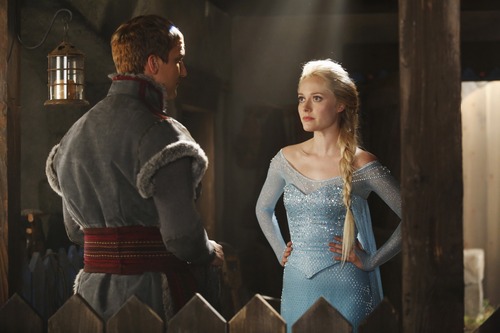 ‘Frozen‘ fans are going to love ABC’s ‘Once Upon a Time’ upcoming story arc. Georgina Haig is donning the icy blue dress and signature braid as Elsa. No official details on what exactly the Queen of Arendelle’s role in the show will be, but Elizabeth Lail will join Haig as Anna and Scott Michael Foster will bring life to Kristoff.

Reports that Hans will join in on the fun have been confirmed, though no actor has been officially been assigned the role. The show is notorious for giving classic characters a punchy twist, so it’s anyone’s guess as to what mayhem Hans will cause. The network has described the character as “a well-bred prince with a serious chip on his shoulder.” Audiences won’t see the conniving Prince until the third episode.

Showrunner, Edward Kitsis teased the plot stating, “It’s similar to the way we did Neverland last year, and the Wicked Witch arc. What we love about Elsa is that she is uncomfortable with her power – she’s lonely – but wasn’t quite sure how to break that loneliness. It took the love of her sister. So we’re not interested in Elsa meeting someone. We’re interested in exploring her as a person, like we have with Regina the past few years.”

Adam Horowitz added, “We’re planning an arc involving the characters from ‘Frozen’ and it also obviously involves the characters that already exist on ‘Once,’ but it’s a close-ended story. We’re more interested in what the movie explored, the relationship between sisters, and that relationship will be central to the story.”

We had a small peek at Haig as Elsa last week, click HERE to see the First (Unofficial) Look at ‘Frozen’ Queen Elsa On ‘Once Upon a Time’.

I guess we will have to wait until September 28th, when the Norwegians take over ‘Once Upon a Time’ to see what happens!

A Daddy-Daughter Dance To Get You Moving