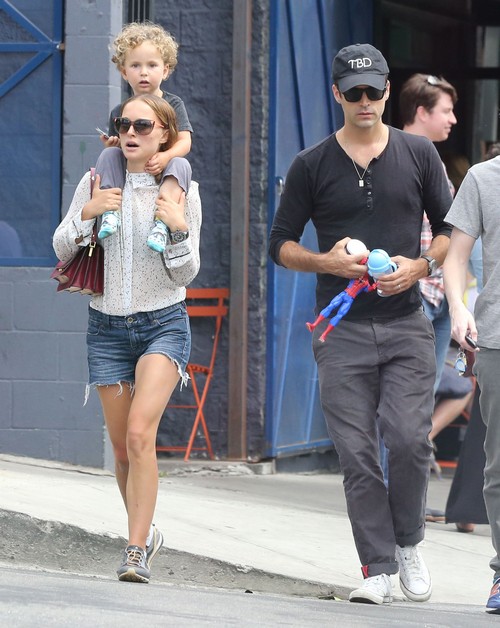 Natalie looked relaxed as she walked with her son perched on her shoulders.  The 33-year-old went for the natural look for the outing with very little makeup and was dressed casually in cut-off jean shorts, blouse and sneakers.   She accessorized the look with the mandatory movie-star dark shades.  Daddy Benjamin got to carry Aleph’s sippy cup and Spiderman figure.Natalie will be making her directorial debut later this year with the Israeli-Palestinian conflict drama “A Tale Of Love and Darkness.”  The movie is a drama based on the memoir of Amos Oz, a writer, journalist, and advocate of a two-state solution to the Israeli-Palestinian conflict.  Not only is Natalie directing the movie she wrote the screenplay and she is starring in it.

Besides directing we will next see Natalie in Jane Got a Gun starring alongside Ewan McGregor . The movie is about a woman who asks her ex-lover for help in order to save her outlaw husband from a gang out to kill him.  The movie is expected to be released February 2015.

How To Prepare Your Child For School