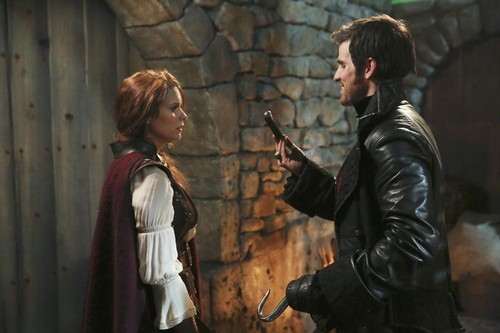 Our favorite fantasy drama ONCE UPON A TIME IN WONDERLAND returns tonight to ABC with a new episode called, “The Jolly Roger.”  On last week’s episode with Rumplestiltskin as her slave, Zelena challenged Regina to a fight to the death and shocked the Evil queen with the reveal of their familial connection, and the town laid Neal to rest.

Meanwhile, back in the past in the land of Oz, a jealous Zelena asked the Wizard to send her to Fairy Tale Land after discovering that she had a sister, Regina, and that Rumplestiltskin was training her to become a powerful force to be reckoned with.  Did you watch last week’s episode?  We did and we recapped it right here for you.

On tonight’s episode Ariel returns to Storybrooke and pleads with Hook to help her find Prince Eric, who never returned to the town when the new curse was invoked. Emma agrees to let Regina teach her how to use magic so that she can help defeat Zelena, and Mary Margaret and David try to prove that they can be just as much fun as Hook is with Henry — who thinks they are boring. Meanwhile, in Fairy Tale Land during the past year, an angry Ariel confronts Hook over her missing Prince Eric, who she assumes was kidnapped and possibly killed by the swarthy pirate. But when Hook confesses that the Jolly Roger has been stolen and Eric is most likely the thief’s prisoner, Ariel unknowingly provides him with a clue as to who the culprit is, and Hook – with Ariel in tow – goes off in search of his ship.

Tonight’s season 3 episode 17 looks like it is going to be as magical as ever so make sure that you tune in and also join us for our coverage for ABC’s hit show at 8:00 PM EST! While you wait for our live updates hit up the comments section and let us know what you think of the episode!

ONCE UPON A TIME SEASON 3 EPISODE 17 RECAP, CLICK HERE …