Kendra Wilkinson: “I’m 33 Weeks Right Now. I’m At The Point Where I Give Up” 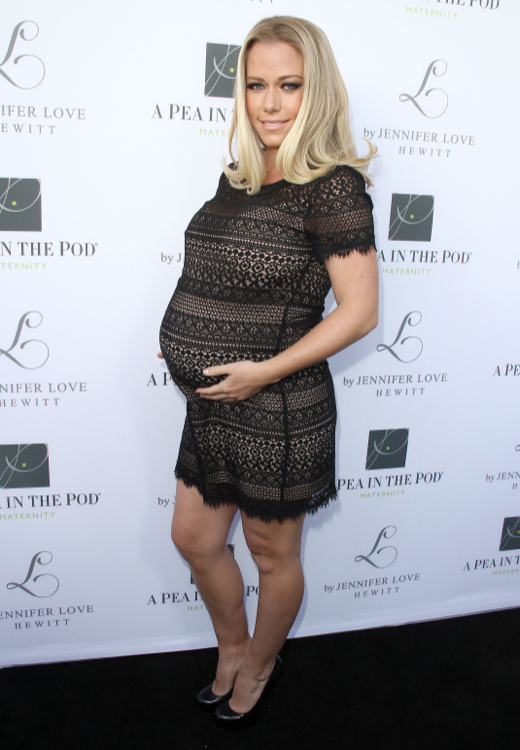 Kendra Wilkinson is nearing the end of pregnancy and is having a harder time making eating healthy a priority.

“I’m 33 weeks right now. I’m at the point where I give up. I threw in the towel,” she told while snacking at the launch of Jennifer Love Hewitt‘s L collection for A Pea in the Pod on Tuesday in Beverly Hills.

The Kendra on Top reality star is still in the process of getting her 4-year-old son Hank Jr ready for being a big brother.

“He is still my baby. That’s the one thing we keep telling him, ‘No matter what, you’re still our baby.’ We’re going to always treat him that way and empower him,” she explains. “Just because we’re having another baby doesn’t mean he’s not our baby anymore.”

Wilkinson and her husband, Hank Baskett, have made it a point to include their son from the start of the pregnancy.

Close to celebrating her fifth wedding anniversary with her husband, Wilkinson says she is happier than ever with her family life.

“We never thought we would even have kids, but here we are having our second child. Reality is smacking us in the face, but it’s such a beautiful thing,” she says. “If it didn’t work out with little Hank — with the parenting, how we’re doing it and how he’s turning out — we probably wouldn’t have done this again.”

Wilkinson adds, “We are so great. Our parenting skills, marriage, partnership, everything is just there so why not have one more? We’re welcoming her with open arms and love and blessings. It’s a celebration.”

Wilkinson is scheduled to give birth via c-section in May.