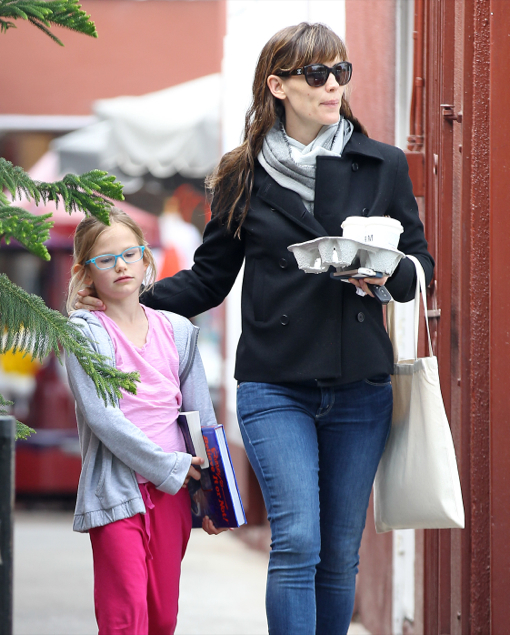 Jennifer Garner stopped by the Brentwood Country Mart with her daughter Violet in Brentwood, CA on Wednesday (Feb. 19).

The Draft Day actress was dressed in a black button-up jacket, grey scarf and jeans while carrying a bag and tray with two cups of coffee. The 8-year-old looked like she was still in her PJ’s as she carried two school books.

Her husband Ben Affleck and his close friend Matt Damon recently appeared in a video to promote two charities, the Eastern Congo Initiative and water.org. People who donate will be given the chance to win a ‘double best friend dinner date’ with the two stars.

“And you and a friend could win a trip to Los Angeles and stay at a four star hotel and be our very special guest at a very special Hollywood event,” Damon said with Affleck, adding,  “It’d be like a best friend double date.”

Garner will be taking Violet, Seraphina and Samuel to spend the summer in Detroit while Affleck films the upcoming Man of Steel sequel.