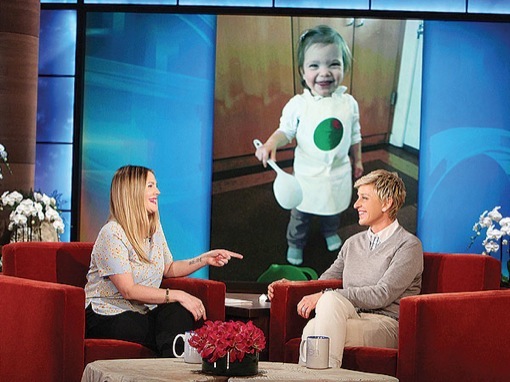 Pregnancy weight can be a pretty touchy-feely subject with many moms-to-be. That definitely is not the case with Drew Barrymore who had no problem finding the gruesome words to describe her weight gain in what is her second pregnancy on Monday’s episode of The Ellen Show. When asked about her eating habits, the actress didn’t hold back one iota:

“I just eat everything I want, which isn’t healthy. I’m bigger this time than my first time. My doctor the other day was like, ‘Yeah, so I think maybe pull back. A little bit,’”affirmed the  actress/producer. “I was like, really? I thought I was doing great. I still fit into those jeans — they hurt when I wear them — but I still fit into them. I don’t ever pose, ‘I’m just so fabulous and I lose it like that.’ I want to enjoy the pasta right now! What’s 10 lbs.?”

But host Ellen Degeneres, instead of reproving her guest for her pregnancy misbehavior, actually egged her on by saying that pregnancy is like a green card which allows you to eat and eat as much as you want, a comment with which Barrymore doesn’t have any problems: “When I’m twirling those vegetable pan fried noodles from Chinese takeout later, I’m going to say, ‘Ellen said that it was way okay to do that!’”. The fat talk then continues with Ellen telling Barrymore, who’s in her second trimester, that she’s going to be even fatter than this(what she is on the show at this time) which was met with: “It’s true! I’m not done. I’m seeing my doctor tomorrow and I’m going to tell her you said that.”

This pregnancy “fat” talk between the chummy gals seems to be an an ongoing angle that started at a celebrity magazine’s award show not that long ago. “I told this joke(at the aforementioned awards), but I don’t know if it translated because we were laughing our butts off backstage,” said the host. “But now we’re laughing again so it all comes full circle!”As explanation for the joke, Degeneres said “No, because I haven’t seen you in a while and instead of saying, ‘Oh, you’re pregnant,’ I just thought it would be funny to say, ‘God, you’re fat.’”