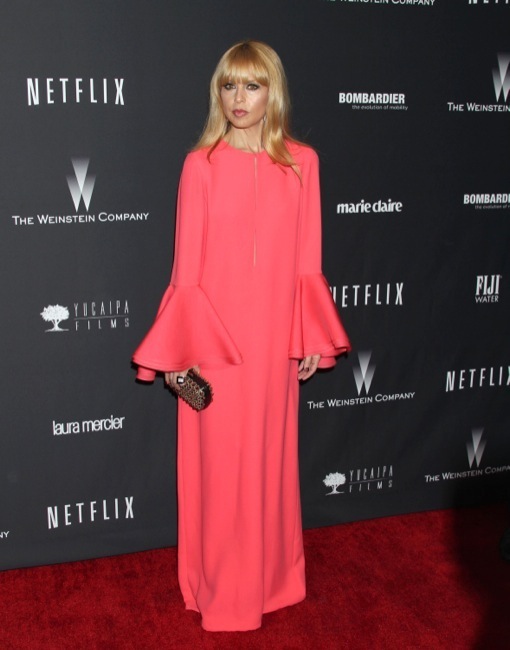 When you give birth only two-and-a-half weeks before, it seems only normal that the hoopla of a Golden Globes after party might just make you see stars. That little factoid was not enough to deter stylist Rachel Zoe from giving a condensed personalized review of the hits-and-misses of the Golden Globes’ big winners and… well that’s all she did really.

“I loved Kerry Washington, she was so elegant. I love her, she is such a great girl,” said Zoe.. “Sofía Vergara too…There are a lot of really beautiful women here tonight.” She then confirmed that she was in position to make the most informed  decision: “To be honest, I recorded the show so I haven’t seen everybody. I saw Cate Blanchett though, she was beautiful!“

But it her was her response in about the condition of her newborn son, Kai, that stole the spotlight of the interview:

“He’s two and a half weeks old and I’m in love!” said the stylist who welcomed the baby boy on Dec 22 with husband Rodger Berman. “I’m so tired though that I’m seeing spots. But it’s easier the second time because it’s not the unknown, so it’s pretty incredible.”

When asked the big question about who she thought was the best dressed, because you know she just had to get asked being a stylist and all, Zoe kept it pretty simple: “Jennifer Lawrence, obviously“. By positioning herself as thus, she in fact disagreeing with the many experts out there who in fact did not have the rising star of The Hunger Games trilogy as the best dressed. Ohh, and maybe the fact that she was J.Law’s designer might of had a trifle to do with all of that… maybe.

Ciara is Pregnant – Confirms Pregnancy By Showing off her Bump