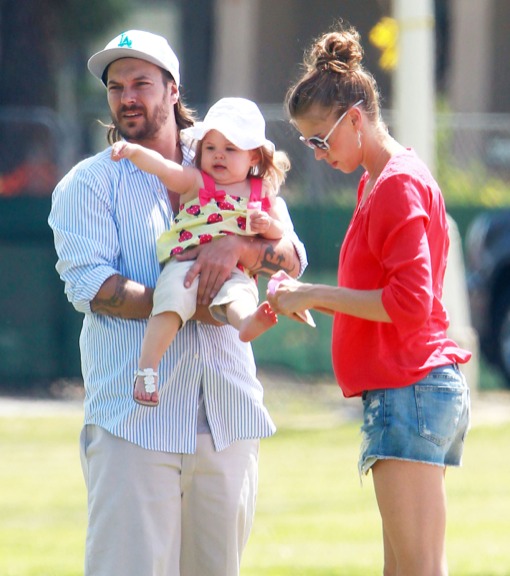 K-Fed strikes again! Just when we thought that that having anything over 3 kids was a thing of the past, Kevin Federline of course has to prove us wrong. The rapper/actor is already the daddy to:  Kori, 11, and Kaleb, 9, from Shar Jackson; Sean Preston, 8, and Jayden, 7, from Britney Spears; as well as  Jordan Kay with current wife Victoria Prince. I have to say I’m glad to have gotten that out of the way.

And it’s not only that large families aren’t as popular as they used to be but celebrities – and I use the term generously here – tend to stick on the lower side of the average babies per couple because of their work commitments. Oh, right, this going to be Federline’s 6th baby but with a 2nd different wife, though he was engaged to Star Jackson. I guess that in the end he does fit in the average babies per couple.

We all know that Federline rose to fame when he swooped Britney Spears off her feet back in 2004. We also know that he was heavily criticized at the time, justly or unjustly, for leaving his then-fiancée Shar Jackson in the middle of a pregnancy. They did seem to reconcile afterwards, however, as Jackson complimented on more than one occasion Federline on his parenting skills. He loves kids, I guess that’s pretty apparent. He also does love to be a parent, something that maybe is not always as apparent, at least his public image would leave one with certain doubts over the facts of the matter. When he left Jackson, he was labeled a fame chaser for lack of a more vulgar word. Why else would he leave his pregnant wife that was about to pop if it wasn’t to take advantage of his 15 minutes? On top of that, his “bad boy” image as a gangsta rapper didn’t help him either.

The thing with K-Fed is that all the sensory information we get from the media sources as well as the public image he has himself created, or helped grow, does not necessarily reflect the fact that he seems to be a good dad, an affirmation which was repeated on more than one occasion on his behalf.