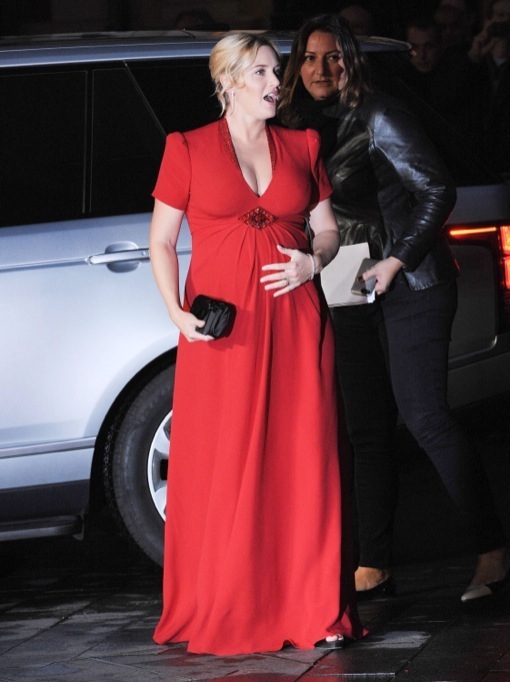 Last Saturday, Dec. 7 Kate Winslet gave birth for the third time to a baby boy. This is Winslet‘s first child with husband Ned RocknRoll whom she has been seeing since Aaugust 2011, and officially tied the knot in December 2012. The British actress gave birth in Sussex County, UK, as her and hubby have been living in the UK for the past little while. Although this is Winslet‘s third child, after daughter Mia Tharpleton, 13, and son Joe Aalfie Wwinslet, 9, the birth marks a new beginning for RocknRoll who is also the nephew of British entrepreneur Richard Branson. They actually met on his privately owned Necker Island.

If you had the expected raise of eyebrow when you first read Ned’s last name, you’re not alone. His “ex” name, or his birth name if you like, was Ned Abel Smith. Why change it to RocknRoll? I could honestly think of a million reasons, who doesn’t want to be rock n’ roll right? But I’m not sure Winslet married the 35-year-old because of her ever-flowing love for his choice in picking last names: ‘I was never going to change my name to Rocknroll. I’ve never changed my name to anything so I didn’t see a reason to start now.’  said the Academy award winning actress when asked about it. We know that in the acting industry, changing your last name is the equivalent to career suicide. And in this case I’m not even sure I would of know where to start if she would go by Kate RocknRoll these days, just try saying a few times out loud. And rumors are that the baby boy will most definitely not go by baby boy RocknRoll though that remains to be seen (we hope not anyways!).

But love is not about first names and last names, it’s about connection and devotion and being there for each there. Though Winslet has been involved in more than a fair share of relationships over the years, she’s always maintained her love for her kids. Back in 2006, before the thought of RocknRoll was but a mere but a mere riff in the distance,Winslett affirmed that she wanted more kids: ”I’m hoping to have more kids. I don’t know whether one or two. Oh, God, I would love to have more.” So far it’s only one, but could it be two in the future? At some point the Brit is going to have to take age difference into consideration: 13 years of difference is already a pretty big gap.

For the full gallery of Winslet looking radiant in that Jenny Packham dress you can click here.

Rachel Zoe is Ready to Pop