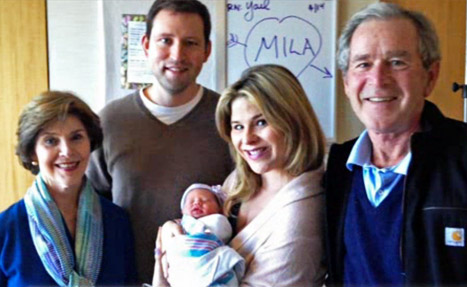 Jenna Bush Hager is looking forward to taking her 6-month-old daughter Mila to Texas for her first Christmas.

“We usually go down to Texas and we’re going to do that again which will be really fun,” the Today correspondent and daughter of President George W. Bush told People at the ninth annual UNICEF Snowflake Ball in New York City on Tuesday. “Mila’s been to Texas, but she’s never been to our ranch, so I’m really excited to take her and get her feet dirty in the Texas soil.”

Jenna says she and husband Henry Hager will be cooking for her dad and mother.

“The transition from the White House and post-White House life was a little difficult because they don’t know how to cook,” she jokes. “We have to cook Christmas breakfast [for them] which is really fun.”

Despite being a Texas girl at heart, Jenna admits they loves living in the Big Apple.

You might also likeMore from author
Jenna Bush Hager