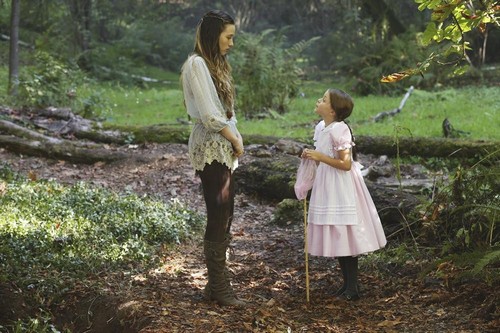 Our favorite docu-drama ONCE UPON A TIME returns tonight to ABC with a new episode called, “Think Lovely Thoughts.”  On last week’s show Mr. Gold and Regina send Ariel back to Storybrooke with an item that would allow Belle to locate a hidden artifact that could help take down Pan. But unbeknownst to them, two men had broken into the town with the intent to stop them – at all costs.

Meanwhile, Emma, Neal and Hook attempted to find Dark Hollow, where Peter Pan’s shadow dwells, in order to capture it, and Mary Margaret was upset with David for keeping his poisoning a secret from her.  Did you watch last week’s episode?  We did and we recapped it right here for you.

On tonight’s show Jafar pays a visit to the Asylum and Dr. Lydgate to uncover information about Alice, while in Wonderland, Alice heads to the Black Forest on her quest. Meanwhile, the Knave is awakened by magic with the help of an unlikely ally and he goes in search of Alice only to find her in terrible danger, and Cyrus does his best to evade the Red Queen. In flashback, Alice returns to Victorian England and her father after losing Cyrus.

Guest stars tonight are Sophie Lowe as Alice, Michael Socha as Knave of Hearts, Peter Gadiot as Cyrus, Emma Rigby as The Red Queen with Naveen Andrews as Jafar and John Lithgow as the voice of the White Rabbit.

So be sure to tune in for our live coverage of the season 3 Episode 8 of Once Upon A Time — tonight at 8PM EST! While you wait for our recap, hit the comments and let us know how your excited you are about the new season of Once Upon A Time! Check out a sneak peek of tonight’s episode right here.

ONCE UPON A TIME SEASON 2 EPISODE 8 LIVE RECAP, CLICK HERE ….