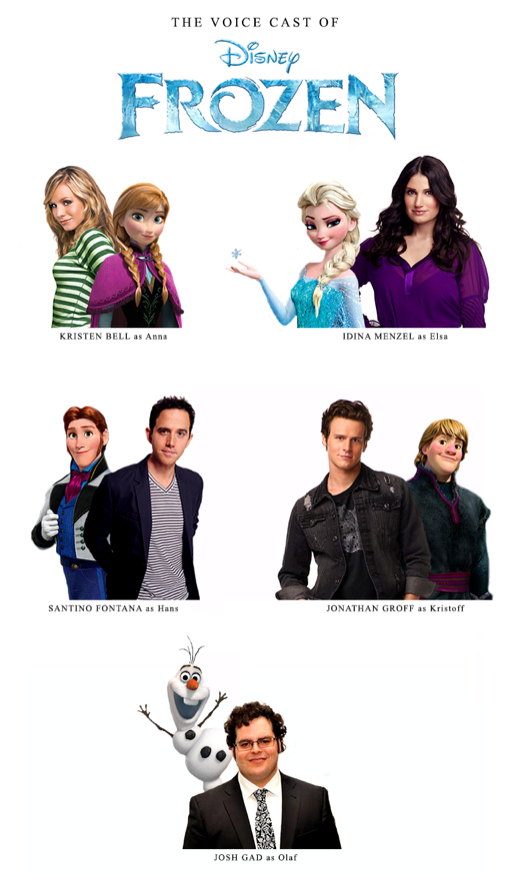 Everyday people can literally have no clue sometimes how annoying they are. Believe me when I say it’s true. Especially when they’re job is nothing more than to ask a series of questions that occasionally border on the personal. And yet it was my group, a group consisting of moms and dads, that managed to walk away as the “fun” group during Disney’s Junket for their newest movie Frozen. Maybe it was our open demeanor but you have no idea how many times the people behind this great film called us refreshing. When it comes down to the moments our kids no longer want to be seen hanging out with mom or dad we can always just think on this “the parens still got it”.

There we were a group out of many asking the musical team, the production team, and the actors probably the same or at least similar questions for most likely the hundredth time that day. What made us interesting is that we were not afraid to gush while asking them about their families. Sure, we got to learn about their other projects but our main concern was always going to be why they signed onto a Disney movie.

Inspired by Hans Christian’s The Snow Queen, Frozen tells the story about how Fearless optimist Anna (voice of Kristen Bell) sets off on an epic journey—teaming up with rugged mountain man Kristoff (voice of Jonathan Groff) and his loyal reindeer Sven—to find her sister Elsa (voice of Idina Menzel), whose icy powers have trapped the kingdom of Arendelle in eternal winter. Encountering Everest-like conditions, mystical trolls and a hilarious snowman named Olaf (voice of Josh Gad), Anna and Kristoff battle the elements in a race to save the kingdom. All resulting in a plot twist I cannot reveal but which I can reassure is both new and well-done.

For over 75 years, Disney has been entertaining us with animated and innovating movies based on one simple thing – happily ever after is always around the corner. In the end no wonder we asked about their families. We wanted to know when and where their happy ending came. 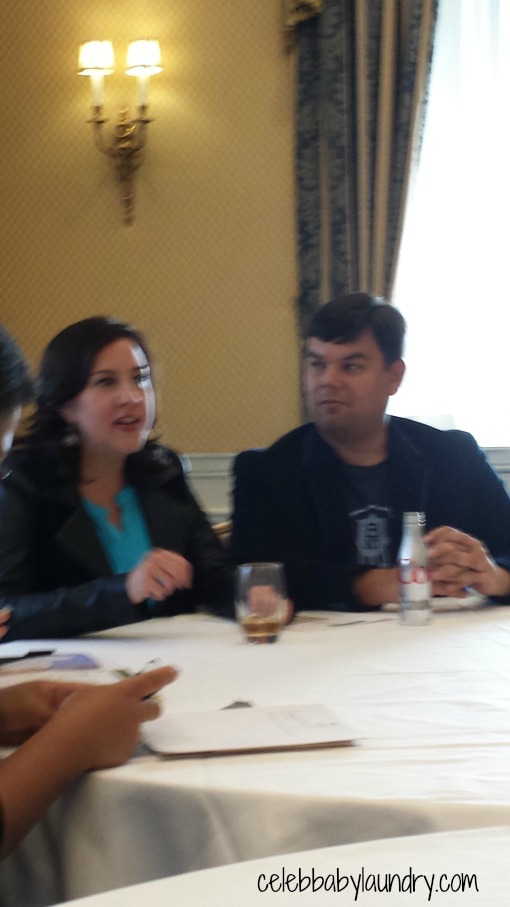 For instance – The music composers behind the soundtrack, married couple Kristen Anderson-Lopez and Robert Lopez, got to thrill us with their song choices. One of the songs called “Fixer Upper” is upbeat while being cringingly cute. It’s about a family convincing a young woman to take a chance on their boy even though he’s a bit of a fixer upper. Bet you would have never guess where the idea for the song came from. Kristen had told us during her roundtable she used to call her husband a fixer upper back when they were dating. She knew she loved him but that didn’t mean he was without faults.

Fast forward several years later and their composing together. A sample of which we got to hear. Also they were funny which I’m sure must have helped them work easily together in what had become a family affair. Their two daughters even got to take part. They each were given a spotlight on the soundtrack. Thanks mom and dad – I doubt anyone else’s show and tell will be able to match that. 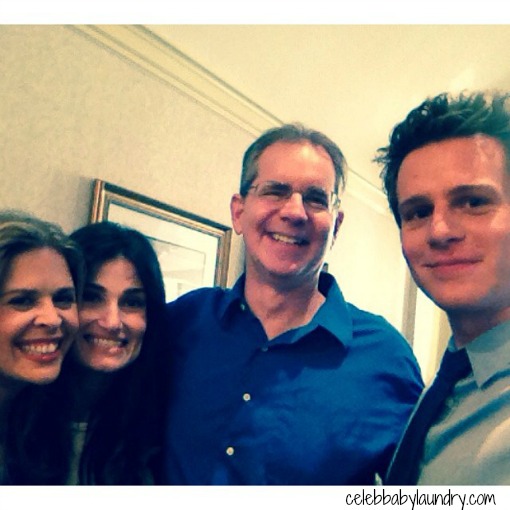 Then again just pointing out a familiar voice would be enough. Idina Menzel is capable of belting out across Broadway and then you meet her. She is surprisingly soft-spoken for a woman who has more than her share getting casted as the villain. Although to her she doesn’t prepare for the roles in the same way. She might have played Elphaba and now Elsa but to her she plays these diverse characters because she loves their layers. That they have to be strong willed and yet she gets to show their vulnerability. A struggle she admits all women deal with.

Her own vulnerability- she recently moved back to the east coast and is learning to be an east coast mom. Back when her family lived in California, she knew where to take her son to play and what activities they could do. Out in New York, she was slightly at a loss. Luckily, she had us who were all too willing to tell her how to get around.

She hasn’t experience snow with her son yet. So she didn’t know about the hot treats littered around the city to help keep you warm before you go back out there ready to catch snowflakes. What one of things she and Walker did get to enjoy was trying to catch a Broadway play. Children love to see them but they should also be old enough to enjoy them. Her son kept standing and might have been getting the way for other people watching the play. His parents had taken him to see Wicked once he started to ask about the pictures with his mom green. Regrettably, they only got to see Act I. 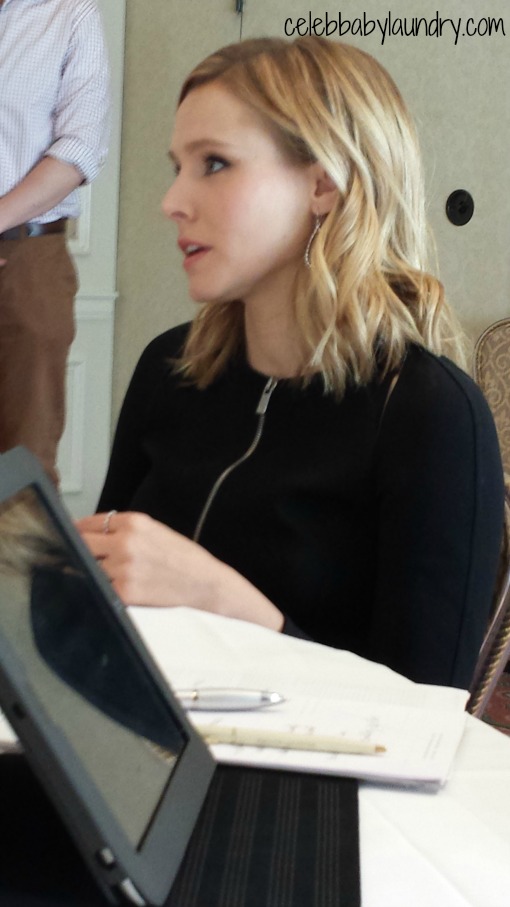 Kristen Bell could probably empathize. She was that kid and a small part of her may still be that kid. She will no doubt tell you she was goofy growing up (how else to explain wanting to change her name to Smurfette) and after seeing her portrayal as Anna – have to say we got to see more Kristen than we thought. There were mannerisms I didn’t pick up on till I was two feet from her. Then it “Oh Yeah, that’s Anna”. Slightly imperfect but utterly charming. Nevertheless we were the Mom and Pop Stop; we had to ask about her daughter.

She’s too young to see the film quite yet but Kristen has many things left to do with her baby. We asked how was parenthood coming along and we found a new mother unafraid to admit she’s entranced by her daughter. She never thought she could love someone that much. Kristen already counts her as one of her best friends. Even the fact that she had to strive to get back into shape merely weeks after the birth of Lincoln for her coveted Veronica Mars role doesn’t deter from that love. It is all-consuming. 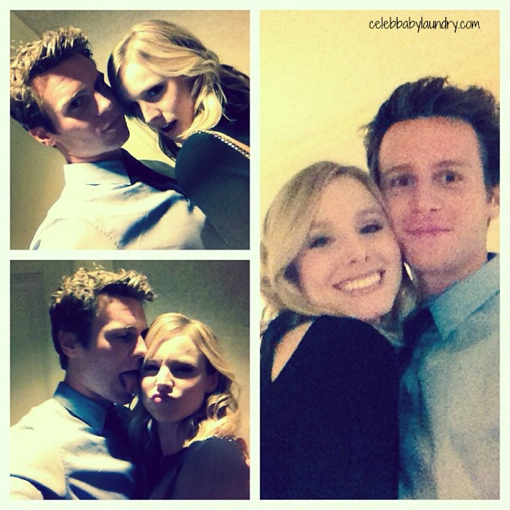 The main question getting asked over and over again was why all of these amazing people signed on for years of work on a Disney movie. They all said, including the ones without children, they wanted to expose a new generation to Disney. They wanted these kids to understand the optimism and the story of love triumphing over all. Because no matter what age you are you will always be the kid at heart that does want to believe anything is possible.

I was one of the few adults in the theatre but I too wanted the magic to be real!

Suri Cruise Heads Back to School