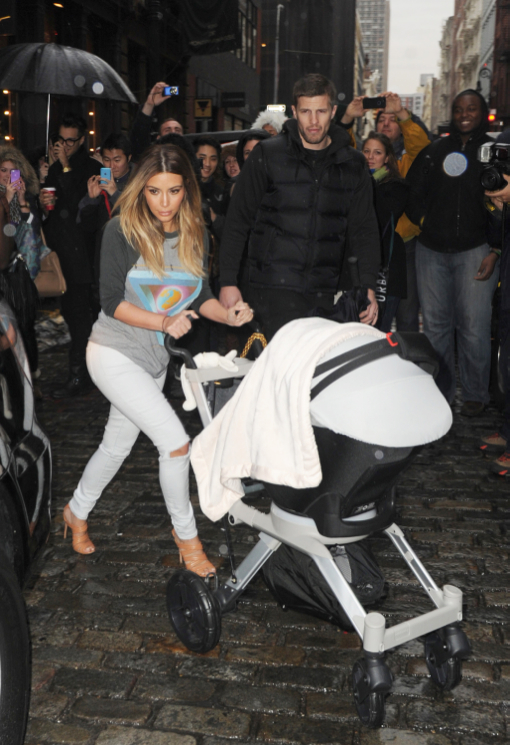 Did Kim Kardashian not get the weather memo this Tuesday, November 26? Did she not tune in to one news channel across the nation to get a sniff of the frigid weather that gave news people so much to talk about before she decided to don this very summery looking ensemble when she went shopping with baby North West? I guess News channels must not be very popular in a Kardashian home. It was 43 degrees cold in New York City yesterday but who would know by looking at these shots of Kim making you think that winter had decided to take the year off while summer is making a premature comeback. Well, maybe besides the shot above since you see all the people around her bundled up while stands out, kinda like a bundled up person in a Kanuk jacket on a bright summer day would.

The Reality TV star of Keeping Up With The Kardashians, whom husband Kanye West dubbed as the The Most Beautiful Woman Of All Time just recently, not long ago made an appearance in West‘s Bound 2 music video. That video was recently spoofed by Seth Rogen and James Franco in a clip more reminiscent of Brokeback Mountain than anything else, but as actors and comedians they pulled it off without causing too much unnecessary stir. In fact, the duo have a well-known bromance going on that just happened to celebrate its first decade – 10 years and counting! And what a way to celebrate too, with Rogen‘s flabby body mirroring the 33-year old socialite – the female role does fit him pretty well indeed! – while Efron‘s toned up 12-pack is a reflection of West‘s masculinity and dominance. The parents of North might have to fear that Bound 2 has already been overshadowed by the bromantic romance of the two comedians.

None of this is bound to matter to West, who has declared that nobody and nothing will affect his perception of his sweetheart. While denying rumors that he bossed every aspect of Kardashian‘s life to the very last minute detail, he was quoted as saying:

‘I don’t give a f*** what type of jacket she got on,” to which he added  ‘Ladies and gentlemen y’all acting like this ain’t the most beautiful woman of all time!’ He then continued, with a bit of clarification: ‘Arguably of human existence. The top ten of human existence.’

Most beautiful woman of all time, arguably of human existence, but only makes the top ten of human existence? Is Kanye West going back on his declaration as soon as it came out of his mouth? Is his mouth that quick that his brain only catches up after it hears, and processes, what came out of it previously? History does not favor the Goldigger singer in this case as he is known as one of the most red-tongued celebrities around, telling poor Taylor Swift off at the Grammy’s a few years ago.

If you thought that the couple’s engagement was one of convenience more than heart-felt love, rapper West has a very poetic response for you:

‘I felt like our love story is a love story for the ages,’ explained West, getting ready to drop the bomb. ‘I felt like when we first got together it’s a Romeo And Juliet kind of thing.

‘Like she’s a reality star and I’m a rapper and people talking about how our brands connect and it doesn’t fit.

‘And I’m just so tired of brands… It’s not about branding at a certain point.’

Kim Kardashian and Kanye West were recently engaged when West decided to splurge for the occasion by renting out the Giants stadium in SanFran to propose to the mother of his 5-month-old daughter.

Google Nexus 7: Made For What Matters! #HolidayGiftGuide #Review