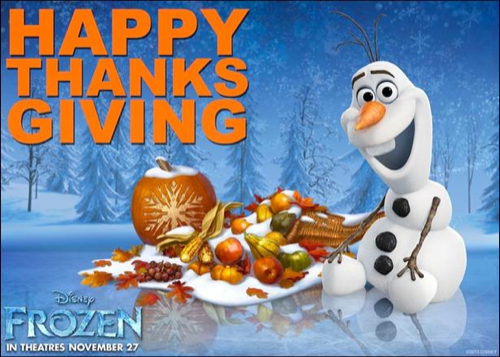 In case you haven’t heard, Disney‘s highly anticipated animated film, Frozen hits theatres today! Earlier, this month I got the chance to attend a sneak peak of the movie and I’m happy to report Disney animators have done it again. Frozen is sure to be an instant classic with it’s strong soundtrack and compelling story.

Music is an important component to any animated film. What parent doesn’t know the words to their favorite songs from classic Disney movies?  The songwriters of Frozen were deeply aware of this and created a soundtrack that will add a couple of new hits to the Disney canon. Written and composed by theTony Award-winning husband-and-wife songwriting duo, Robert Lopez and Kristen Anderson-Lopez, Frozen delivers with the power-ballad Let it Go. The song is performed in the movie by Elsa (Idina Menzel), when she leaves the kingdom of Arendelle and creates her own ice palace.

Another characteristic of a successful Disney movie is a heroine that follows her dreams while finding out who she is as a person  while on her adventure. There is also the “Prince Charming” component” that every girl loves. I’m not sure how much I can reveal but I will say that love takes many forms and the film did explore the ‘love’ component.

Based on the Hans Christian Andersen story The Snow Queen, Disney’s Frozen takes the audience to a new magical kingdom they haven’t seen before – a winter wonderland. In the Scandinavian kingdom of Aredelle, there are two princesses instated of one – Elsa (Idina Menzel) and Anna (Kristen Bell).  Unfortunately their happy world is shattered, when Elsa discovers she has the gift of freezing the world by simply waving her hands. The powers that were kept secret from her are dangerous and are brought on by emotional stress. To protect her younger sister from being turned into an icicle, Elsa looks herself away.

A problem unsolved is a disaster waiting to happen. After years of being a recluse, Elsa is set to be crowned Queen of Aredella. Among the many visitors that come to the palace for her coronation is handsome prince Hans (Santino Fontana). Instead of hooking up with the soon-to-be Queen he ends up becoming engaged to Anna. This news sets Elsa off who accidently freezes the entire country, thus sparking the adventure of Frozen.

Anna sets off on an epic journey with rugged mountain man Kristoff (voice of Jonathan Groff) and his loyal reindeer Sven—to find her sister. Anna and Kristoff must battle the elements to save the kingdom. Along the way we encounter Olaf, a snowman that is sure to become a favorite Disney character.

Will Anna be able to save her sister? Will Elsa be able to understand her magic or is the, “they lived happily ever after” not meant for her?

Check out Frozen, in theatres today to find out!