Return to "Exercise During Pregnancy To Boost Your Baby’s Brain" 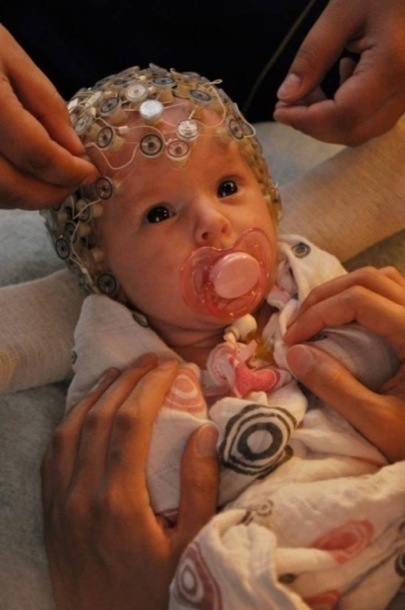 Embargoed to 2300 Saturday November 10 Undated handout photo issued by Universite de Montreal of a baby “wired up” for a study to see if exercising during pregnancy affects infant brain development. Pregnant women who take as little as 20 minutes of moderate exercise three times a week enhance the brain activity of their newborns, scientists found. PRESS ASSOCIATION Photo. Issue date: Sunday November 10, 2013. Just 20 minutes of moderate exercise three times a week was enough to give infant brains a head start, scientists found. The benefit could have an impact on a child’s entire life, according to researchers attending the Neuroscience 2013 congress in San Diego, US. See PA story HEALTH Babies. Photo credit should read: Universite de Montreal/PA Wire NOTE TO EDITORS: This handout photo may only be used in for editorial reporting purposes for the contemporaneous illustration of events, things or the people in the image or facts mentioned in the caption. Reuse of the picture may require further permission from the copyright holder.

Next
POPULAR IN THE COMMUNITY