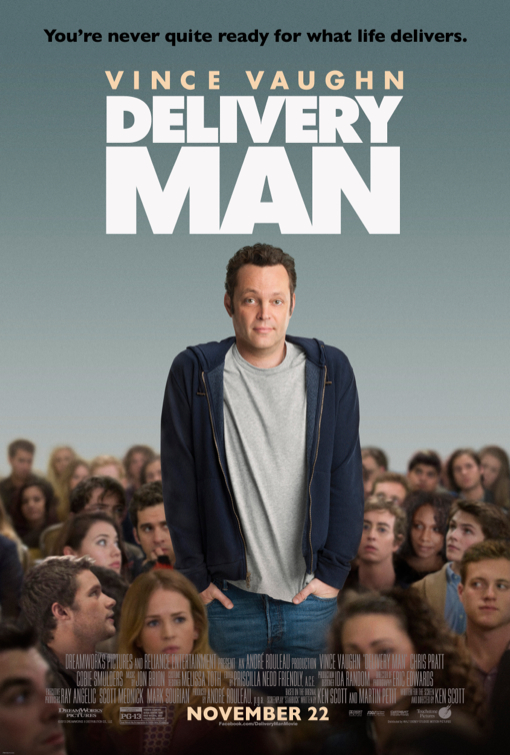 When does a man that has children become a father? Is it in the delivery room or when he first holds this entirely new person he helped create? Mommas and Papas each have a different definition associated with the title of parenthood. For mothers we can all generally agree, but for men things tend to be blurred.

In the newest movie out today, we can at least agree to one aspect of fatherhood: if his heart is there, then he’s a father. Delivery Man is about that kind of man. Once upon a time, an underachiever named David donated his sperm in return for cash. However, he needed serious money and so he might have been an overachiever in his “donations”. Safe to say that it wasn’t very smart of him. Now, in the present time, the sperm bank contacted him to say that his kids want to meet him. A bit daunting seeing as he never really wanted to be an actual parent and yet that’s not the worst of it: his donations lead the sperm bank to overuse him. He’s the biological father of 533 children!

Talk about a kick in the face. That number alone would send any sane man into justifiably getting snipped right afterwards. David doesn’t though he remains at a loss on what to do next. He had to do something. He can’t just ignore the situation he’s in so he looked through the folders the lawyer had dropped off. Inside were the profiles of the kids that were born because of him. Once he acknowledged that he ended up taking some form of responsibility for them. He tried to become their invisible guardian angel. There were laughable blunders and heartbreaking scenes (parenthood in any shape or form isn’t easy) but it all mattered.

Being there for a kid will always matter.

David didn’t mean to become anyone’s father. He simply showed up and cared. Surprisingly, that was all it took. Who knew?

The movie was interesting in the way we all rooted for a typical schmuck. Then again, when is Vince Vaughn not playing that type of character? He’s good at it and he always makes the audience sympathetic to a guy they would normally crucify. If I heard about an actual event with over 500 children then I would probably shame him and call him greedy. Yet David needed his kids in order to finally become a man. When his happy ending turns out to be something most of us wouldn’t expect, why was I still clapping for him?

Disclaimer: Celeb Baby Laundry has not received any payment as a result of this review. We were invited to a screening of the film for the purposes of review. All opinions are our own.

Save on Stylish Clothing For Your Teen This Holiday Season #HolidayDiscounts