Christie Brinkley’s Daughter, Sailor Brinkley-Cook: Don’t Tell Me I Look Like My Mom! 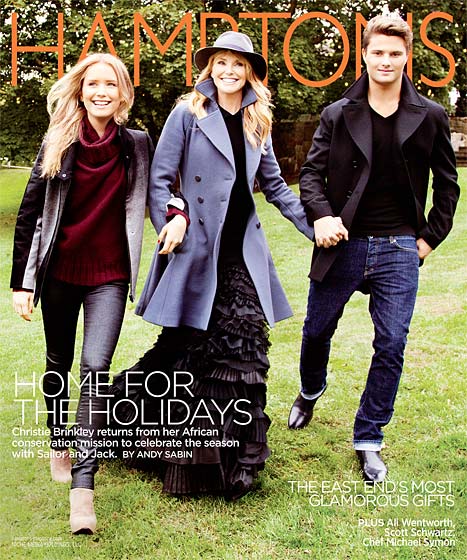 When you look at the cover of the Hamptons magazine’s holiday edition 2013, the similarities between Christie Brinkley and her daughter will seem striking. The same blond, free-flowing blond hair, similar facial features as well as that gorgeous smile. But don’t tell that to daughter Sailor Brinkley-Cook,15, because she doesn’t believe that the similarities are that evident.

“As much as people say we’re twins, I don’t think I look like my mom that much, so I think I can make my own identity in the modeling industry.” said the teenager although she does acknowledge that her mother’s popularity helped to at least set her foot in the industry, “It got my foot in the modeling world, but otherwise it’s pretty normal.”

Sailor recently signed with famous modeling agency IMG Models in hopes to accomplish her dream of setting in her mom’s footsteps of becoming a top Supermodel. She believes that having Christie Brinkley as a mom has helped her in some way, but necessarily in all ways:

“It hasn’t really changed my life in a way that people would think,” said Sailor. “I go to school; no one sees me differently. I’ve never been followed by paparazzi, except when I’m with my mom.”

This holiday’s cover of Hamptons is not the first time daughter Sailor appears in a cover with her mother. Last July, Sailor and Christie appeared jointly on the cover Bella NYC which is where we intially got a hint of Sailor’s plans to follow in her mom’s footsteps:

“It was only recently that I wanted to get into modeling. I said, ‘Mom, should I diet?’ and she was like, ‘No! You don’t need to be skinny, you just need to be happy with yourself and confident and fit.'”

It sure does seem like Sailor has her mom’s modeling instincts at her still tender young age. Though her mom is probably right in telling her daughter not to worry about such things as she has the experience to know how to approach her daughter. Christie shared some additional advice for her daughter in the Hamptons mag:

With kids, you just shout little snippets here and there when you can, so it ranges from ‘Have fun with this job but always be professional to ‘Show up on time and be respectful of everybody else’s time,'” to which she added the warning that Sailor try to avoid that “dark part of modeling that comes along with the shiny, light, bright, happy part.” She finally told her daughter not to look at those internet sites where her pictures will eventually be published because “Those comment threads are an invitation for the bitter and disenfranchised to hide behind a fake name and try to tear you down,” added the 59 year old former Super Model.

Sailor Brinkley-Cook is the daughter of Christie Brinkley and ex-husband Peter Cook. Appearing alongside the duo to complete the trio on the cover of Hamptons mag is brother Jack Brinkley-Cook.

10 Pregnancy Superfoods You Should Be Eating