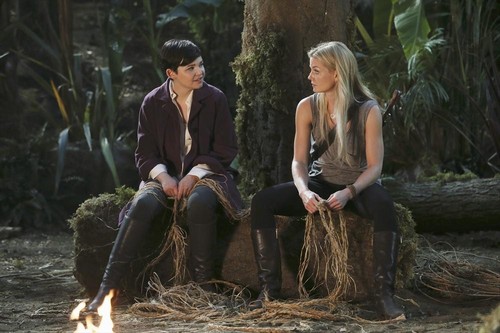 Our favorite docu-fantasy ONCE UPON A TIME returns tonight to ABC with a new episode called, “Good Form.”  On last week’s show Mr. Gold made a decision to confront Pan, but will he go there to save Henry or give in to the prophecy that the boy will be his undoing?

Neal found himself back in Neverland and in the custody of one of Pan’s most loyal Lost Boys. And David struggled for his life as the poison continued to take its toll on him. Meanwhile, in the Fairy Tale Land that was, Rumplestiltskin went in search of a missing Bae, who had followed a mysterious figure who stole away children with his music.  Did you watch last week’s episode?  We did and we recapped it right here for you.

On tonight’s show with the deadly Dreamshade coursing through David’s body and close to death, Hook takes him on one last journey to find a sextant that could help them decipher a map that would lead them off Neverland. Meanwhile, in the Fairy Tale Land that was, Killian Jones – aka Hook – and his brother, Captain Liam, sail off under orders of the King to find a powerful indigenous plant on an uncharted land that could help heal any injury.

Once Upon A Time airs tonight at 8PM EST! While you wait for our recap, hit the comments and let us know how your excited you are about Once Upon A Time being back! Check out a sneak peek of tonight’s episode [CLICK HERE]