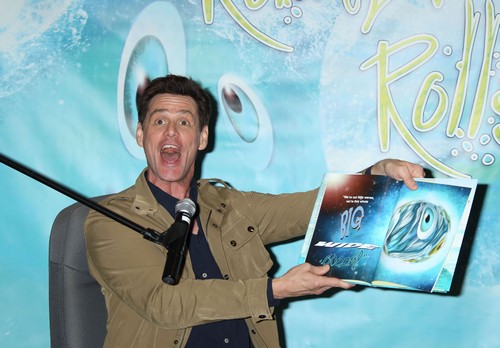 The book is 64-pages long and according to Jim it is, “a story about a wave named Roland who’s afraid that, one day, when he hits the beach, his life will be over. But when he gets deep, he’s struck by the notion that he’s not just a wave—he’s the whole big, wide ocean! It shows humanity’s interconnectedness through the metaphor of a wave in the ocean.”Jim drew inspiration for the book from his own personal experiences.  “When I was a child my parents were smokers and I had a deep fear that they would die…and then what would happen to me? I think that’s a common fear for children—the fear of loss. It’s an early existential crisis, if you will.”

Jim has been meeting with fans all of October to introduce the book to the world.  At the events Jim explains what the book means to people who attend, reads the books, signs copies and then takes the time to speak to people.

The book has already won the Gillett Burgess Award for excellence in children’s books.  The book is available on Amazon.com and at Barnes and Noble stores nationwide for purchase.

Top Easter Books to Read to Your Kids