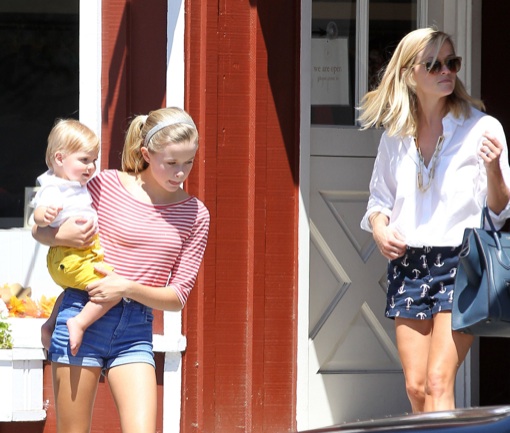 Reese Witherspoon was spotted out with her daughter Ava and son Tennessee at the Brentwood Country Mart in Los Angeles, CA on Saturday (Sept. 7).

The Walk The Line actress wore a white blouse and navy shorts with a white anchor print on her way out of the market. The 13-year-old looked like the spitting image of her mom while carrying her little brother.

Also starring Colin Firth, the film explores the legal trappings that led to the conviction and eventual release of “Satanic” teens Damien Echols, Jason Baldwin and Jesse Misskelley Jr., while shedding some insight as to who might be responsible for one of the most notorious crimes in U.S. history.

She also has two other movies coming out in the next year, including The Good Lie and Inherent Vice.