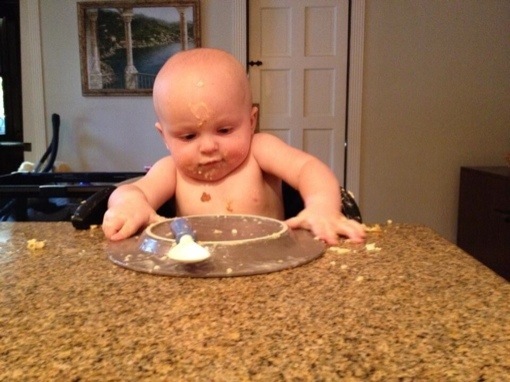 Anna Faris is one proud mommy!

The Cloudy With a Chance of Meatballs actress took to her Twitter page to share an adorable shot of her 12-month-old son Jack.

“So awesome my child can feed himself-now I can go back to bed,” she captioned the photo of the baby with leftover food all over his face and body while staring at his flipped over plate on Saturday (Sept. 28).

Meanwhile, the actress is working on a new CBS series Mom alongside Allison Janney.

“I have a son,” she said of her reason for taking the role. “I was sort of thinking, ‘You know, maybe I’ll just let my husband [Chris Pratt] work, and I’ll just laze around, sit by the pool. Different priorities.”

Faris and her husband Chris Pratt welcomed Jack on August.