Angelina Jolie & Her Jet-Setting Kids Catch a Flight at LAX 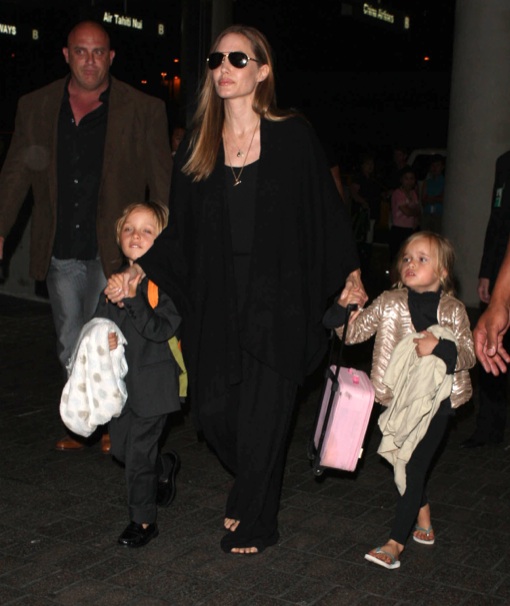 The Maleficent actress was dressed in her usual black attire while protectively holding the hands of her twins as they were escorted into the terminal. Shiloh and Zahara held hands and Pax concentrated on carrying his favorite purple stuffed animal. Maddox followed behind.

The family are heading to Sydney, Australia where Jolie will direct  a new World War II drama, entitled Unbroken.

The film tells the true story of Olympic track star and war hero Louie Zamperini, who survived for 47 days without food or water when his airforce plane crashed in the Pacific in 1943. He endured shark attacks, aerial attacks and hunger before being captured by the Japanese and sent to a prisoner-of-war camp.

‘‘I’ve had the privilege of spending a great deal of time with Louie Zamperini, who is a hero of mine, and now — I am proud to say — a dear friend. I am deeply honoured to be telling his extraordinary story, and I will do my absolute best to give him the film he deserves,” Jolie said in a statement.

Universal has scheduled the movie for release on Christmas Day 2014.

How to Keep Lice Away