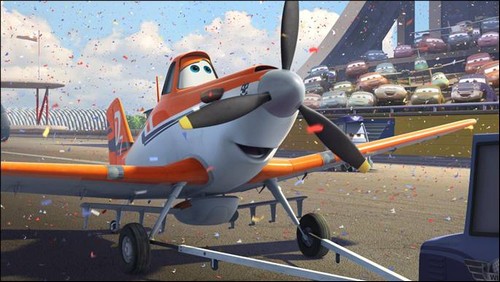 Celeb Baby Laundry was honored to be invited to a special 3D advance screening of Disney’s PLANES last night in Manhatten, NYC.  Disney has another hit on their hands and Planes is another must-see movie for both adults and children alike.  The movie captured the whole audience’s attention last night.

The movie starts off with the theme, an underdog getting his chance to become a hero. Dusty Crophopper is a crop duster but he’s always dreamed of becoming a racer and competing in the Wings Around The Globe competition.  He has many friends that stick by him through the good and the bad.  They not only stand by him because they believe in him but he’s also a pretty nice plane.  Even when the others are mean and sometimes cruel, he never sinks to their level.

Being true to himself helps him make his dreams come true – the chance to race among champions.  He gets to show everyone that you can do anything if you just believe in yourself.  Many parents are hoping the themes of the movie sink into their children’s minds.

One of the main lines from the film is “To be more than what they were made for”.   Now you or anybody else try and tell me you don’t want to teach your child that.

We highly recommend this film, it is great for children and for adults, a summer must see.  The movie opens August 9th, 2013.