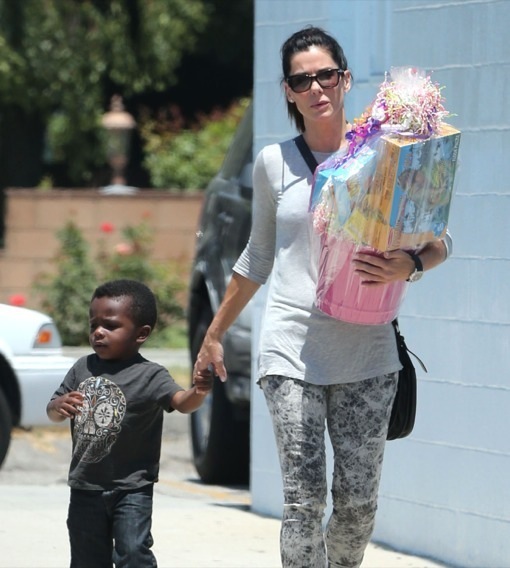 Sandra Bullock was photographed taking her son Louis to a birthday party at the Fun & Fit Gymnastics Center in Burbank, CA on Sunday (July 28).

The actress wore a grey top with marbled printed pants while holding the 3-year-old’s hand and a pink birthday basket full of present in another hand.

When asked if she would do a sequel to action-comedy flick, The Heat, Sandra admitted she doesn’t see one happening.

“I know they say never say never, but right now, I can’t imagine it,” Bullock said. “If you look back on my illustrious sequel work, nothing has proven successful. A sequel is such a daunting thing, because you don’t want to lose the magic and the charm of the first one.”

The Oscar winner was referring to to her sequels, Miss Congeniality 2: Armed and Fabulous and Speed 2: Cruise Control, which all bombed at the box office.

All The Details on Fergie’s Gay-By Baby Shower