Christie Brinkley & Daughter Sailor Pose On Their First Cover Together 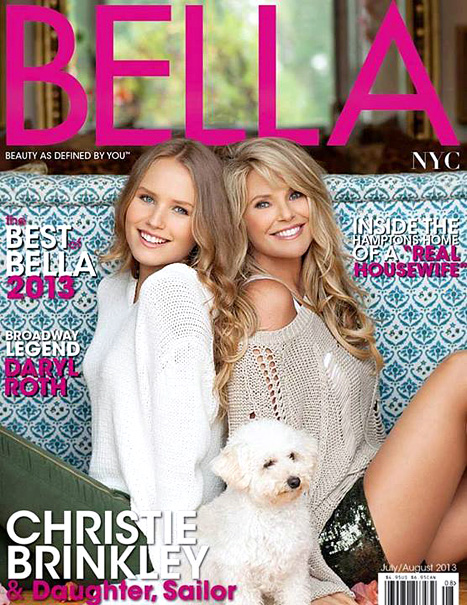 Christie Brinkley proudly took to her Facebook page to share the July cover of Bella NYC in which she poses alongside her 15-year-old daughter Sailor.

“Sailor, Chester and me on our first cover together since Sailor started modeling!” she captioned the cover shot.

In shot the mother and daughter sit back-to-back wearing knit sweaters with their puppy Chester perched right between them.

In the magazine interview, Christie admits it seems like yesterday her daughter was only a baby.

‘It seems like yesterday that I was holding her in my arms,”  she tells. “And now she’s standing next to me, this radiant beauty.”

The former Sport Illustrated model’s daughter may have only just decided to follow in her moms footsteps, but she is already seeing success. She recently appeared on the August cover of Teen Vogue.

“It was only recently that I wanted to get into modeling. I said, ‘Mom, should I diet?’ and she was like, ‘No! You don’t need to be skinny, you just need to be happy with yourself and confident and fit.’ All of her photos really show that. She was like a goddess,” Sailor tells the magazine.

What do you think of Christie’s daughter following in her footsteps?