Angelina Jolie Celebrates Her 38th Birthday In Berlin With Family 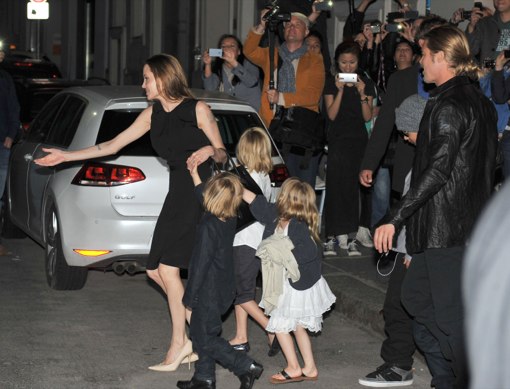 Angelina Jolie celebrated her 38th birthday with her fiance Brad Pitt and their six children at Kuchi Restaurant  in Berlin, Germany on Tuesday (June 4).

The birthday girl was pictured wearing her signature outfit of choice, a black dress and cream heals.  She held the hands of twins Vivienne and Knox while Shiloh walked next to them. Brad dressed casually in black pants and a leather jacket while he walked with Maddox, Pax and Zahara.

The evening before Brad who is in midst of promoting his new film World War Z  treated Angelina to a romantic night out in Paris at the Italian eatery Il Vino.

“He’s such a wonderful man and a wonderful father,” Jolie told reporters while attending a premiere of his movie. “I’m very, very lucky.”

Brad also feels the same way of her.