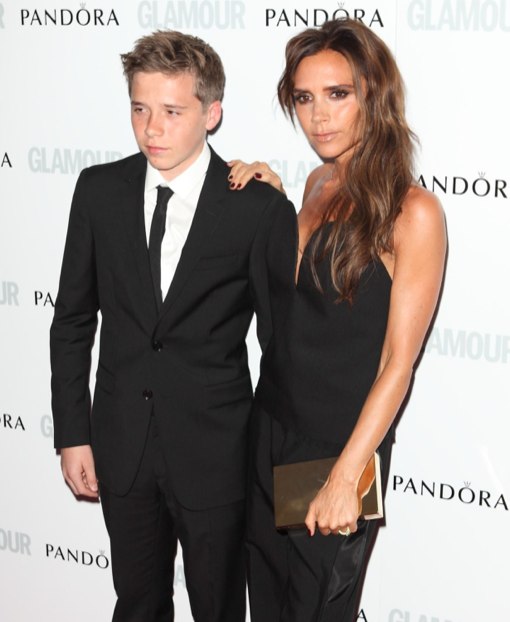 Victoria Beckham and her eldest son Brooklyn attended the Glamour Women of the Year Awards 2013 at Berkeley Square Gardens in London, England on Tuesday (June 4).

The fashion designer wore a trouser jumpsuit by Belgian designer Maison Martin Margiela with a Victoria Beckham clutch. Brooklyn looked dapper in a black suit as he posed next to his mom.

The purpose of the event was to honour extraordinary and inspirational women from a variety of fields, including entertainment, business, sports, music, science, medicine, education and politics.

Victoria was named woman of the decade.

“My mum is my woman of the year. I’m sure a lot of people say that about their mums but she is. She’s here tonight,” she told. “I really love women but there aren’t enough women out there who support other women. That’s what we should do, support each other. That’s why I’m here tonight.”

Other celebs were also honoured. Nicole Scherzinger, who is a judge on the UK X Factor was named best TV personality at the glitzy bash. Daniel Radcliffe was named man of the year.

Meanwhile to find out how David Beckham Will be Protective of Harper Dating, head over to our friends at Girls Talkin Smack who has the scoop, CLICK HERE …

Angelina Jolie Celebrates Her 38th Birthday In Berlin With Family