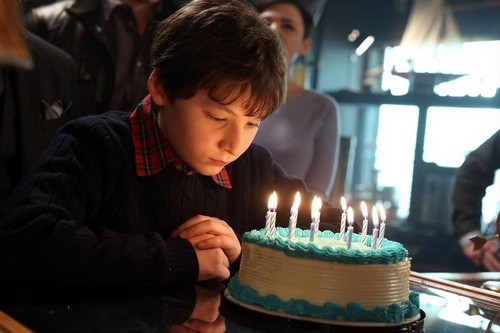 Our favorite docu-fantasy ONCE UPON A TIME returns tonight to ABC with a new episode called, “Lacey.”  On last episode  while Mary Margaret went off on her own in an attempt to come to grips with what she did to Cora and how her deed had affected her, she stumbled upon August, who had hidden himself away from the others and was completely made of wood — ashamed at the actions he had taken in life; and Emma was shocked when Neal invited his fiancée, Tamara, to come to Storybrooke. Meanwhile, before the curse was cast, August was introduced to a man of magic who might have be able to prevent him from turning back into wood — but at a steep price.  Did you watch the last episode? We did and we recapped it here for you!

On last week’s show OUAT returned after a three-week hiatus with a retrospective episode called, “The Price Of Magic.”  The retrospective explored the series in a way that brought new viewers up to date.  It also teased us on what was upcoming in the exciting final four episodes of the season.  If you missed it you can catch a review HERE!

On tonight’s show Mr. Gold enlists the aid of David to help him try to jog Belle’s now cursed memories and get her to love him again; and when it is revealed that the magic beans Anton (Jorge Garcia, “Lost”) and the dwarves have been harvesting have begun to grow and could possibly transport everybody home, Emma is torn over whether she would want to live in fairytale land or stay in our world. Meanwhile, in the fairytale land that was, Rumplestiltskin forces Belle to accompany him on a hunt to kill a thief, whom she had freed in the name of mercy.

Tonight’s episode 19 is going to be exciting, and you won’t want to miss it. So be sure to tune in for our live coverage of the season 2 episode 19 of Once Upon A Time — tonight at 8PM EST!