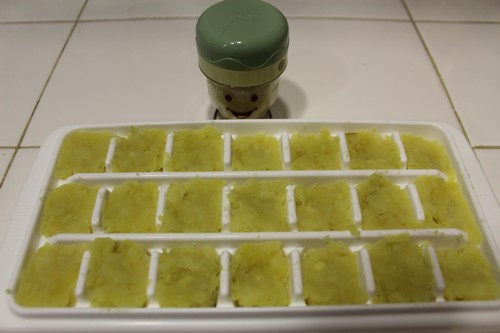 This was my first time making baby food and there were some hiccups but overall it was a success.  After reading many books and talking to a lot of my friends, we decided to start with sweet potato. By the way, sweet potato is not the orange sweet stuff that you eat at Thanksgiving topped with marshmallows – that’s yams. I learned that yams are a type of sweet potato and yams are the sweeter ones.

I read that baking is the best way to serve sweet potato and preserve all the nutrients so I went ahead and baked a few.  First I poked holes with a fork, then I covered it with foil and baked it in the oven at 400 degrees for about 40 minutes. After it cooled, I opened the foil and started to dice up the sweet potato. I guess I didn’t cook it long enough because the insides were still a bit hard and crunchy. Instead of starting the oven again, I decided to steam them – that took another 30 minutes. Luckily, I started the process during Baby C’s third nap so I had a little bit of time before dinner.

After they were done steaming, I put them in a food processor. I guess the sweet potatoes were too startchy and there wasn’t enough liquid because the food processor wasn’t able to mix and puree them very well. I was getting a little frustrated at the process so I took it out on the sweet potatoes and started mashing them with the potato masher. It wasn’t as smooth as I wanted it but after I mixed it with a little breastmilk it thinned out. The extra sweet potatoes went into ice cube trays to be frozen for later. I am loving the Container Store’s ice cube trays with lids. Great for freezing and storing plus they are very reasonably priced!

In the end, Baby C loved the sweet potatoes! Three more days before we start something new…we’re thinking avocados next!