Romeo Beckham Gets A Huge Billboard In Paris (Photos) 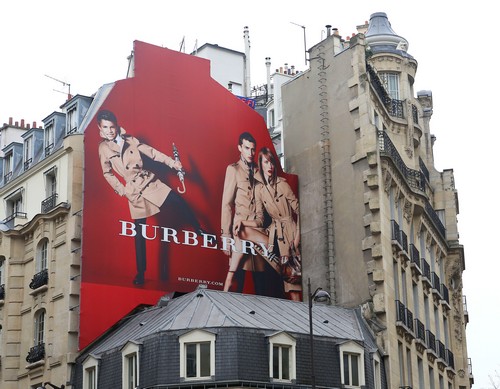 David Beckham isn’t the only Beckham taking over Paris – His Son Romeo is taking his fashion career to new heights!

David and Victoria Beckham’s 10-year-old son, Romeo, made his modeling debut in the Burberry Spring/Summer 2013 campaign. In the campaign, the stylish youngster playfully posed for the camera while wearing a Burberry trench coat, dress pants and shoes.

Now following up on that Romeo has a  huge Burberry billboard on the side of a building in Paris, France.  It looks like the sky is the limit for the 10-year-old.

Romeo follows his mother Victoria into the fashion world.  Romeo was hand-picked by the British label’s Chief Creative Officer, Christopher Bailey, for his first big break.  Reportedly Romeo, ‘stole she show’ during the photo-shoot.

It looks like Romeo has decided to follow his mother’s career path and not become a footballer like his father David Beckham.  I wonder what David thinks about that?  What do you think is Romeo too young to be a model?  For more great shots of Romeo’s Burberry Billboard photos, head over to ICYDK who has more photos for your enjoyment HERE!

David Beckham Catches a Flight With his Children