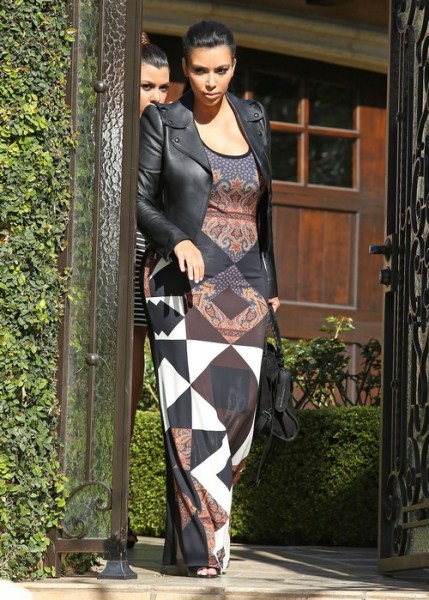 Don’t be surprised to hear that Kim Kardashian could be pregnant again at the end of the year, because according to sources, Kanye West plans to have at least six children with the reality star in the near future. The rapper has been over the moon ever since finding out his girlfriend was expecting their first child together, and having seen the close bond Kim has with her family, he wants to expand his own to the same size.

Kanye doesn’t really have a family, since his mother Donda passed away, so being welcomed into the Kardashian family must have made him realize how important family really is. West happens to be very close with everyone, including Rob Kardashian and Scott Disick,- so once he told Kim that he would love to have a big family like the Kardashians, Kim was more than happy to agree. Of course she’d say yes! Can you imagine the child support she’d get from six children if they ever broke up? Jesus Christ!!

Now’s sources share: “Kanye grew up as an only child and the Kardashians have been a revelation to him. He wants his kid to have loads of siblings, so he’s told Kim not to get cosy with just one baby. He’d like them to keep making babies until they have at least six.” Kim’s first baby is due sometime in June, while she is already believed to be expecting a baby girl, though she plans to keep this a secret until the new season of Keeping up with the Kardashians airs in May. Business, as usual, right?

Tamera Mowry-Housley Is Embracing Her New Figure After Given Birth