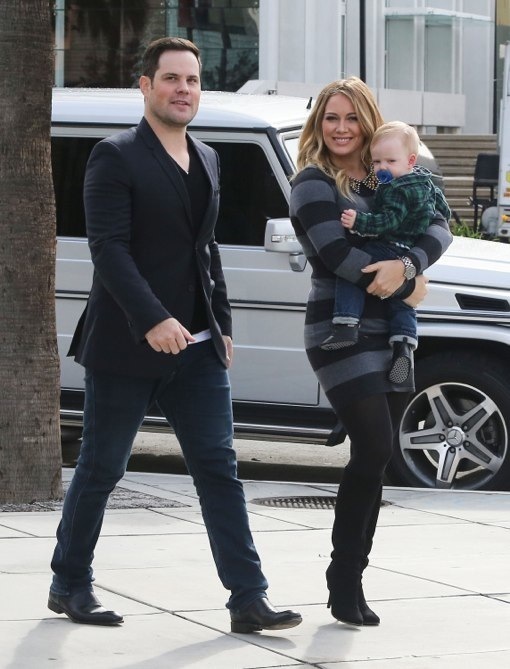 “We’re really good,” Duff told of her husband at the event. “He’s always doing everything for me. He is seriously the sweetest, most thoughtful, romantic person. He puts up with me, so I appreciate that!”

Although, they have no immediate plans to give Luca a sibling.

“I’m not trying to have a baby anytime soon!” Duff exclaimed.

The actress also opened up about shedding the pregnancy weight after giving birth.

“I feel elevated and better about myself when I do work out,” said Duff.

“My one trainer helped me lose a sh-t ton of weight,” Duff revealed. “I lost like 30 pounds. His name is Gabe Johns and he is amazing. He’s a boxing trainer and he comes to my house. I live in the canyon, so we just run. He runs my ass up and down the hill.”

The Raising Hope guest star added, “We do some circuit stuff and boxing, which is a lot of fun and you get out a lot of sh-t that way. The other trainer I want to give a shout out to is Vivica, and she has been my Pilates instructor for like seven years. And Harley Pasternak, who is like a genius. He is a sculpting genius.”

Duff also praised her hockey player hubby for being a hands-on parent.

“I think it took like a good five months for us to be in a nice rhythm — but not in a negative way at all, just in a new way,” she said of being first-time parents. “He’s the best dad. When I see him with Luca, it’s beautiful, it’s like happy, it’s bliss, it’s wonderful, so it’s really, really sweet.”