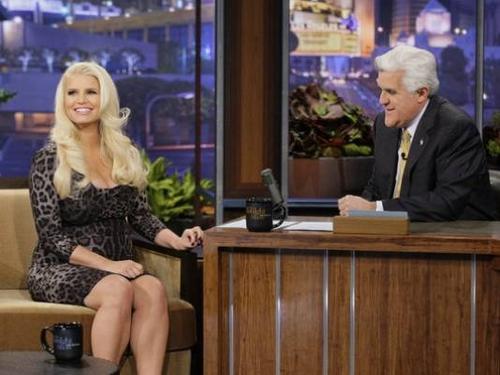 Appearing on The Tonight Show with Jay Leno on Tuesday (Jan. 15), Jessica Simpson showed off her expanding baby bump in a form fitting leopard dress while opening up about her second pregnancy.

“We’ve had two different wedding dates, but he keeps knocking me up,” Jess joked of fiancé Eric Johnson.“We’re doing it very backwards, I know… I’ll just keep my legs crossed, I guess, this time.” l

“Apparently it was a part of God’s plan for my life,” she continued. When she discovered she was expecting again, “I was extremely shocked,” Simpson said. “Because I was going through a lot of hormonal changes, trying to get back to the old, vibrant Jessica. You know, it was kind of like a one-night stand. And it happened, all over again!”

The Fashion Star mentor also reveals she has been nauseated and not having the same sort of cravings as when she was expecting daughter Maxwell Drew, who’s now 8 months old.

“I’ve been really, really sick so I can’t wait to actually be able to crave something like I did in my first pregnancy,” Simpson explains. “I’m due in the summer so I still have a ways to go — hopefully I start feeling better.”

The Weight Watchers spokesperson admits that she gained “a lot more” than her doctors recommended during her first pregnancy.

“I didn’t really make any healthy, good decisions,” she says. “The last time I ate everything in sight. I was really happy to be pregnant and I just didn’t even step on the scale. I was the person who turned around and said, ‘Just don’t tell me, I’m having fun.’“

“I guess I just didn’t realize you could gain that much weight that quickly,” Simpson explains. “I had fun doing it but once I had Maxwell I realized that it all wasn’t water weight and I had to really work hard. In four months I lost over 50 pounds.”

Report: Jeremy Renner Is Going To Be a Dad