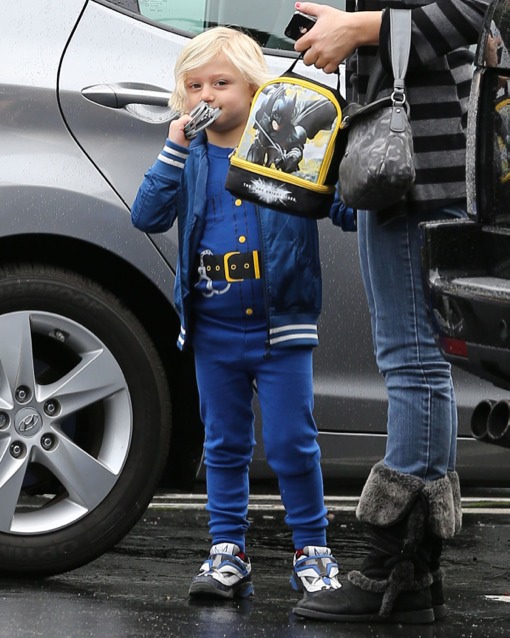 Gwen Stefani and Gavin Rossdale‘s son Zuma Rossdale was pictured getting dropped off at school by his nanny on a rainy day in Los Angeles, Ca on Tuesday (Dec. 18).

The 4-year-old wore a police officer themed jumpsuit while holding a pair of handcuffs as his nanny carried his Batman lunch bag.

The No Doubt singer who celebrated her 10th wedding anniversary with Rossdale in September told Vogue their secret to keeping their marriage going strong.

“It’s pride … You feel proud. There are just so many rewards that come with it. You have to work at it. But, actually, it’s fun to get to this point. Because you learn so much about somebody. It’s like these wars that go on and then you kind of get through it to the other side, and it’s like, Wow,” she said, having celebrated her 10-year wedding anniversary in September.

“And obviously, you get stronger. And then having kids takes the whole relationship to another place. It is the ultimate collaboration. Both of us have such strong opinions about how it should be, and it’s really fun to do it together.”

Jessica Simpson Confirms She Is PREGNANT

Snooki Is Not Going To Spoil Lorenzo With Too Many Gifts